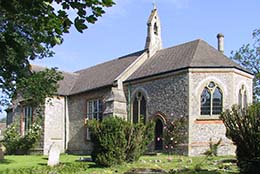 Images of some of the Notable Features in St John Evangelist, Lacey Green

An Illustrated Article about St John the Evangelist's Church, Lacey Green - Page 1 of 3

The Rev Richard Meade became the Perpetual Curate of the Parish of Princes Risborough in 1806, which included the Upper Hamlets of Lacey Green, Loosley Row and Speen, where he long wished that they could have their own Chapel-of-Ease. The financial effects of the Napoleonic Wars left most of the local land split between John Grubb of Horsenden Manor and Lord George Augustus Henry Cavendish, who had inherited Latimer House from his father the 4th Duke of Devonshire. After much debate, the local Enclosures Act was passed, with a stipulation that land would be provided in Lacey Green for a Chapel-of-Ease.

The following appeal was soon launched by the Rev Richard Meade:

The Upper Hamlet of the extensive Parish of Princes Risborough consists of three contiguous villages, Speen, Lacey Green and Loosley Row, lying above the Icknield Way, and situate on the summit of the Chiltern Hills. They contain upwards of 800 inhabitants who, for the most part, are precluded from any convenient opportunity of attending Divine Worship according to the Rites of the Church of England by reason of their remote situations, being 3 to 5 miles distant from the Parish Church, to which the young, the aged and the infirm can but seldom resort.

To remedy this inconvenience a plan was arranged by the incumbent of the parish to build and endow a new church, or parochial chapel, for this district, by the voluntary contributions of the Nobility, Clergy and Gentry, by Parochial collections, and small donations of devoutly disposed and benevolent persons. This is because the population consists chiefly of rack renters and labourers who were utterly unable to defray the expense or contribute much towards accomplishing this Christian and charitable undertaking of true religion and godliness.

I suspect that the desire for an Anglican church for the villages could also have been influenced by the building of Speen Baptist Chapel in 1813.

The appeal was given wide publicity in Buckinghamshire, London, and all counties in the Diocese of Lincoln (Buckinghamshire had been in the Diocese of Lincoln since 1072). The appeal was very successful, with 17 donations from people who owned land in the Parish, and 71 other donations of £5 or more. Most of those 88 donations could be regarded as from"Members of the Nobility, Clergy and Gentry" who had been specifically targeted. There were also around 200 other benefactors who gave amounts of up to £5, which totalled about £500. In all £2,200 was raised. There were also many contributions of fittings for the new church, two endowments of land, and the site for the church was given by the Rev Richard Meade, who had launched the appeal.

One donation was actually the design for the church itself. The 1820s coincided with the reign of George IV and was known as the Regency period, however it was also still in the era of the Industrial Revolution, when the use of new techniques and materials was flourishing. New churches at that time could be ornate, but they could also be quite austere, particularly their exteriors. The design for Lacey Green Church was by John Norris, a distinguished antiquary, geologist and scholar who had inherited Hughenden Manor in 1816. However, Hughenden was then a Georgian house, and not the re-modelled Disraeli home that we know today.

For Lacey Green, John Norris obviously wanted a simple but elegant and very symmetrical exterior in a cruciform layout, but he must have realised that he could specify modern materials which would allow large square-topped windows, to give a bright interior. 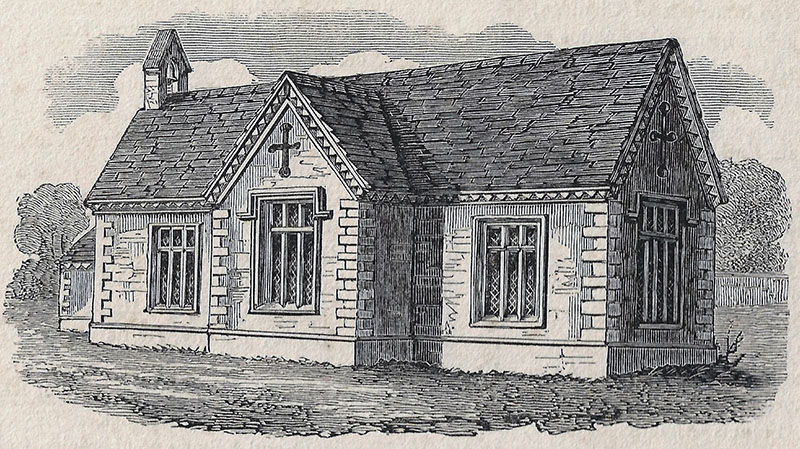 Drawing of original Church, seen from SE. There were 3 of the large windows on each side, and one in the E wall on the right. The drawing shows it with four sets of lights, instead of the 3 sets in each of the side windows. 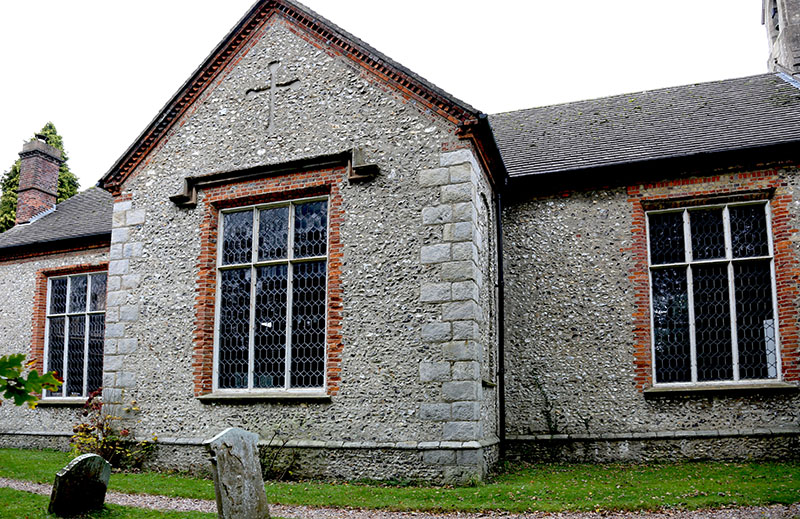 S side of church in 2020, showing it still looks virtually identical. The walls are covered in Chiltern flints, the corners have large quoin stones, undoubtedly local Denner Stone, and the window openings are finished with brickwork.

The Architect who used John Norris's design was James Chadley, and the builder was Richard Jordan of Amersham. 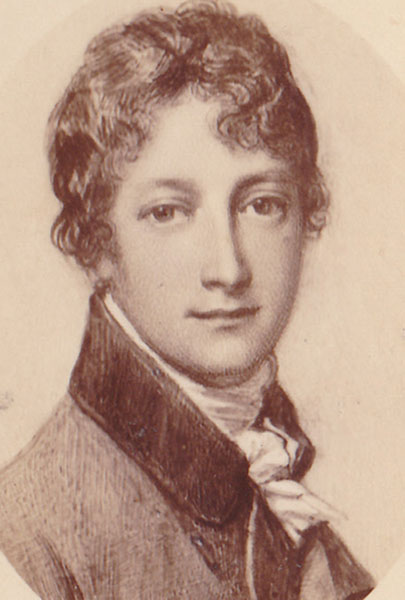 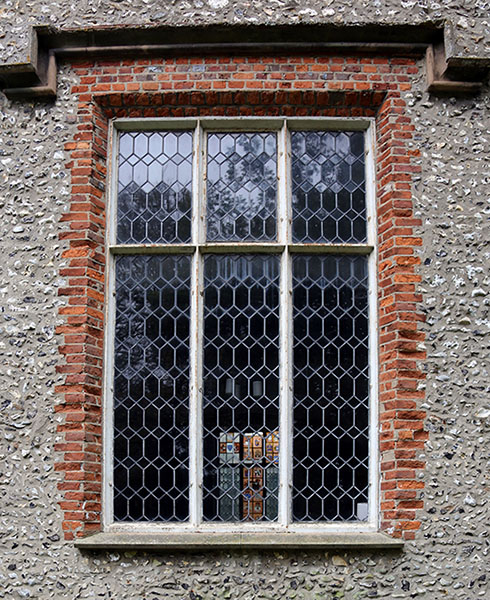 John Norris's idea was to use cast iron for the window frames, which would allow much narrower mullions and transoms than stone ones. The windows could also be bigger, again letting in more light. Norris's fairly revolutionary idea for this 1820s church did not really take off, as within a few years fashions had changed to the Gothic Revival, which called for replicating the stone tracery of the medieval centuries. 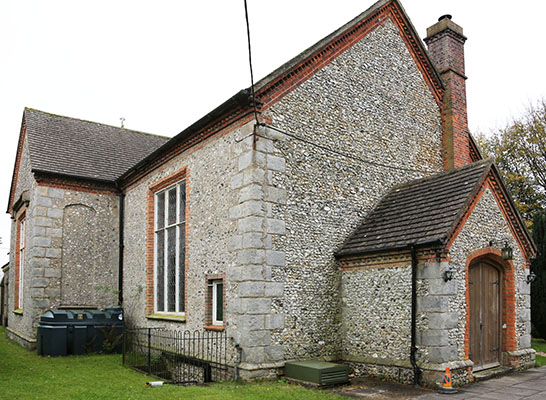 On the left we are looking down the N side, which has 3 large windows identical to those on the S side. The Porch obviously also dates from the 1820s, as its detailing precisely matches the Nave. 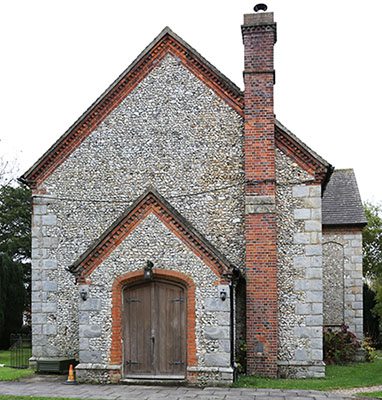 The W front has no windows, so can be described as fairly plain. The brick chimney is a later addition. 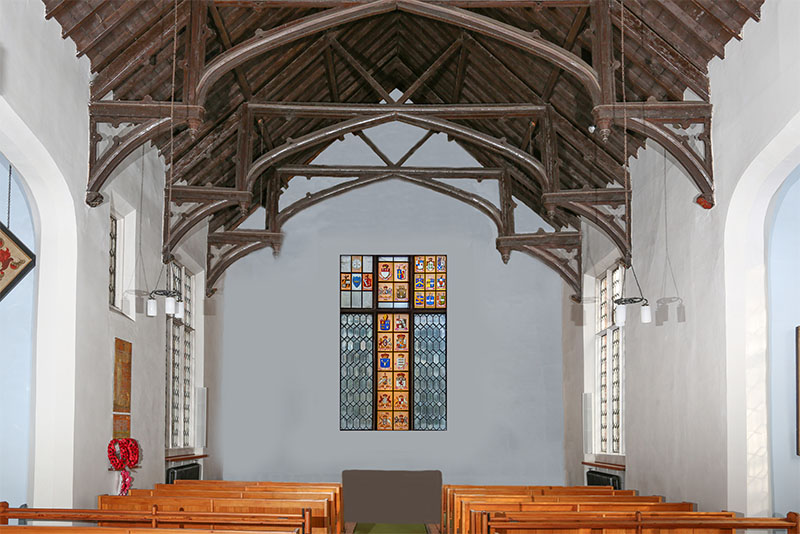 This reconstruction of the original East wall of the church shows how the interior could have looked for the first 46 years. There could have been 4 sets of lights in the East window instead of the 3 shown. The arrangement is how the panels are now (in the N Transept), but we do not know how they were originally arranged when in the E window, as reconstructed above.

The glass shows the Coats of Arms of 29 of the benefactors of the church, emphasising that the appeal had specifically targeted "Members of the Nobility, Clergy and Gentry". The congregation in the early church would have had a constant reminder of some of the people who had enabled their church to be built. The glass was moved to the North Transept in 1871, it is shown further down this page. In this photo we can also see the east end of the rather special roof of the Nave. 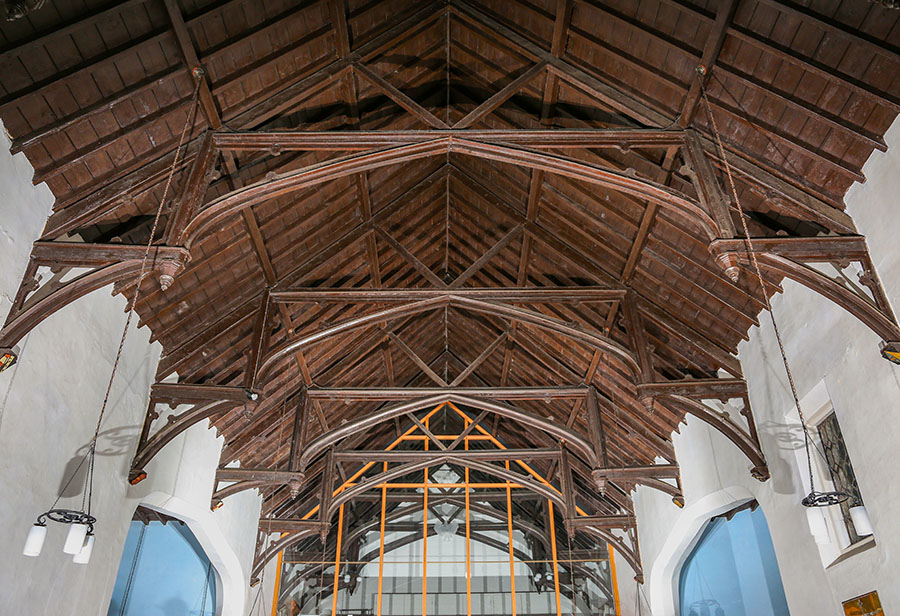 The splendid roof of 6 bays is a hammerbeam roof that is made of far more delicate timbers than the best known examples which are, of course, mainly medieval work. Whether its concept was the idea of John Norris or the architect J Chadley, I am not sure. The lighter coloured wood now at the far end is the structure of a modern glass screen that divides the upper part of the west gallery from the rest of the church. 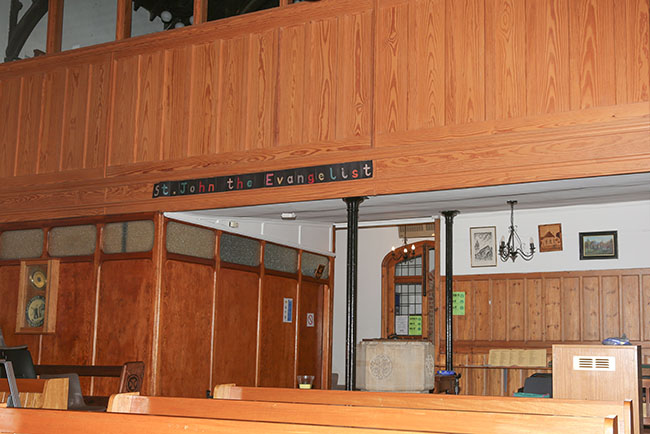 This view is looking under the West Gallery which still rests on its original cast iron posts, one can be seen here either side of the font. 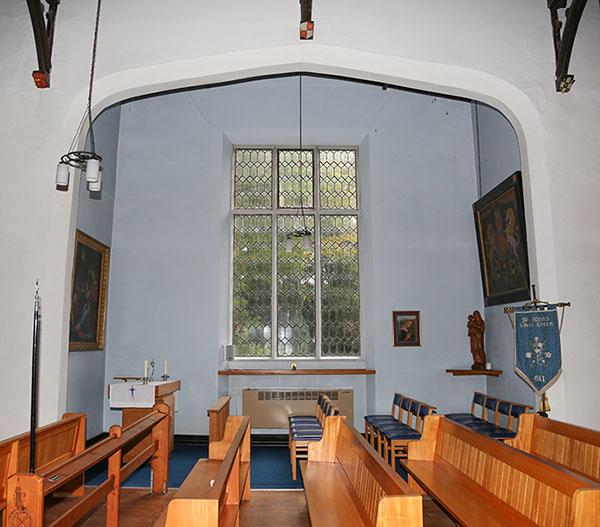 This is the South Transept, which opens into the Nave under a very flat arch. Originally it had pews facing the Nave, with a Gallery above for extra seats. Since 1927 it has been used as a Chapel, with chairs facing an altar. 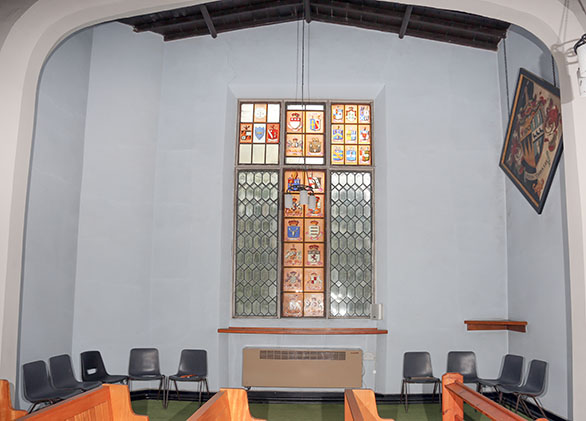 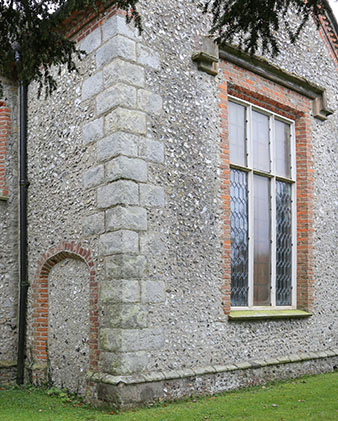 This is the North Transept where, since 1871, the window has housed the Heraldic Glass from the original East wall. Details of the benefactors whose arms are portrayed in each of the 29 panels are on our Stained Glass website, to see click here.

The North Transept had what was described in 1825 as "A Capacious Private Gallery of Lord George Augustus Henry Cavendish". As his nearest home was Latimer House, how often he used his Lacey Green pew is not known. In the published list of benefactors, only 2 people (the Bishop of Lincoln, and a Buckinghamshire MP) gave more than the £44 10s donated by Cavendish. However, to access his private gallery at Lacey Green, he had his own private entrance through a doorway (now blocked) which can be seen in the right hand photo above. He later became the Earl of Burlington, and built the Burlington Arcade.

As well as 29 Arms of original benefactors on the Stained Glass, another 12 shields were fitted at the base of the wallposts of the hammerbeam roof, with 6 shields on each side. They are all painted on small metal plates, with three of them repeating arms that are on the glass of the window that is now in the North Transept (see above).

The new parochial chapel at Lacey Green was consecrated on 3rd July 1825 by the Bishop of Lincoln. There was an evening service on the same day with the Prebendary of St Paul's Cathedral. On that day 19 babies and young children were also baptised in the new church. With a size of 60 feet long by 30 feet wide (across the transepts), in its report written on the Consecration day, the Bucks Herald rather optimistically said, that with its 3 galleries, the edifice was calculated to contain 700 persons.

Following the Rev Richard Meade, new Vicars were appointed in 1826, 1844 and 1848 when the Rev William Johnson Burgess arrived. He was determined to enlarge the church, which you can read about on the next page.