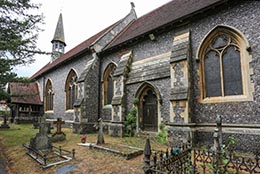 THIS CHURCH BUILDING IS NOW USED AS COMMERCIAL PREMISES

Our Information and Images for the redundant church of Holy Trinity, Marlow - Page 1 of 4

During the 19th century, Buckinghamshire towns were expanding, which coupled with a rise in church attendance, meant that town churches were becoming increasingly overcrowded. Great Marlow was no exception with All Saints Church not being able to accommodate all those who wanted to attend. The wealthy people of the town also paid for their own private pews, which severely restricted space for those who were not wealthy. It was therefore decided to relieve the problem by building a Chapel-of-Ease on the Northern edge of the town, which would be Holy Trinity church. This church had free seating so inevitably became the church most used by the poorer residents of Great Marlow.

In 1846 the Catholic church of St Peter was opened in Marlow, provided by Charles Robert Scott-Murray, and designed by the architect Augustus Welby Northmore Pugin, who also built Scott-Murray's private chapel at Danesfield House, near Medmenham. Pugin was the most prominent Gothic Revival Architect, and inspired George Gilbert Scott to follow in his footsteps and adopt the style, and Scott became the most prolific Gothic Revival Architect. In turn, his work encouraged the future generations of his family to become Architects.

Scott was chosen as the architect of the new Anglican Chapel-of-Ease called Holy Trinity. By then there was some rivalry between Pugin and Scott, who I suspect was pleased to build a church less than half a mile away from Pugin's church of St Peter. Holy Trinity opened on 13th August 1852, but the young Pugin died just a month later.

Holy Trinity was built to accomodate 500 people, with seating for 390 adults and 110 children. As with virtually all of Scott's buildings, it was built in a very solid way, looking as if it was built to last. It has a Nave, Chancel, and a North Aisle, with a Vestry beside the Chancel. All the original fittings such as doors and hinges, also all look very strong and purposeful. The style is Decorated, which was Scott's favourite allowing some elaborate decoration, particularly in window tracery, which are mainly Geometrical Decorated. Most of the Gothic Revival Architects found the Early English style rather too plain, and the vast majority disliked the Perpendicular style. The original layout of the building is still intact, with no extensions or major changes ever having been made, with the exception of partition walls and mezannine floor, added since the church was made redundant. Some writers have said that the building has an air of having been "run off to fulfil a contract". I would suggest that they take a closer look at the splendid stonework inside the Chancel windows.

We can assume that in 1852 all the windows had plain glass. The church's nine stained glass windows were fitted between 1867 and 1923. We cannot say how much decoration there was inside the church but with the building costing a total of £3,000, lavish decoration could not have been a priority. However there are two intriguing items with attractive painted decoration in the chancel, which could well be original decoration. It was in 1870 and 1871 that the Chancel was given some very fine decoration, with a new reredos, painted roof, painted walls, and a variety of other fittings. The reredos, and upper parts of the side walls still have this decoration, with two panels beside the East window.

After over 120 years service, the decline in congregations meant that Holy Trinity church was declared redundant on 8th June 1977. It had been listed as a Grade II listed building in January 1974, so luckily has been preserved, unlike many other churches in other towns. There was much debate as to how it should then be used, but for most of the subsequent years it has been used as offices, having had a free-standing mezzanine floor added to the N Aisle and Western end of the Nave. At the end of 2018 it has taken on a very different use as the premises of a hairdresser.

Virtually all the photographs on these pages (and all the 108 shown on our Stained Glass pages) were taken in August 2018 when I was kindly given the opportunity to spend a couple of days in the building by the owner whose business had used the building as their offices for many years, Roger Staton.

The two views below were taken from the same place in the churchyard, but many years apart. 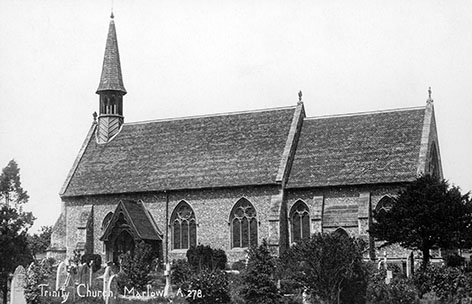 An old postcard view of the South side of the church, probably from the 1940s. 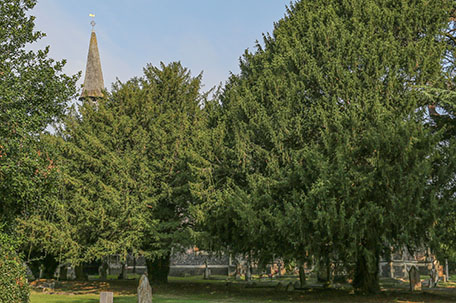 An equivalent view in Summer 2018, by when the trees are nearly hiding the whole church. 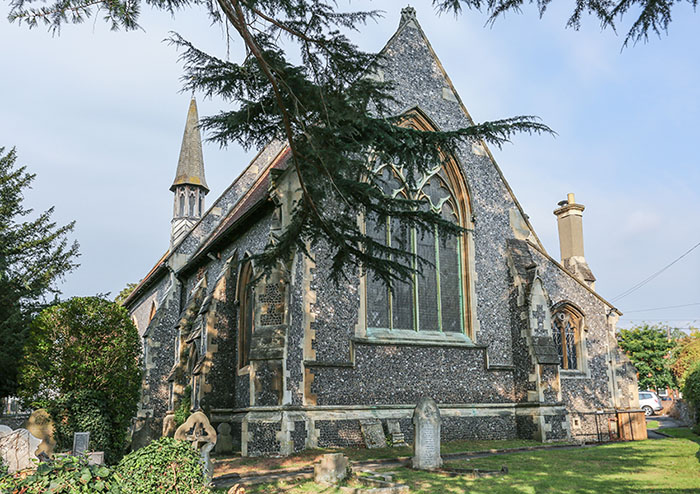 In this view from the south-east, a tree branch is growing right across the large east window. The small priest's vestry is on the right. 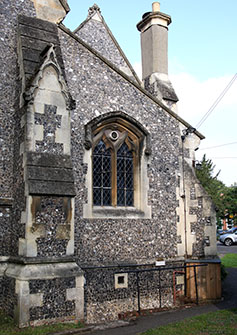 This is a closer look at the end of the Priest's Vestry. The church's boiler room was underneath. 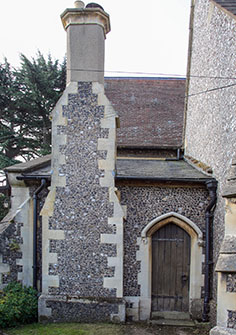 Two chimney pots show that the priest had his own fireplace, but he also had his own doorway. 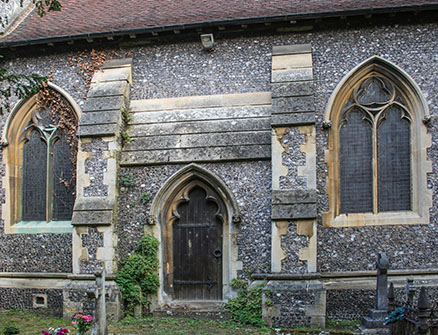 This is the Priest's Door in the south wall of the Chancel. It has its own roof as the wall is thickened to make a tunneled entrance which can be seen inside. 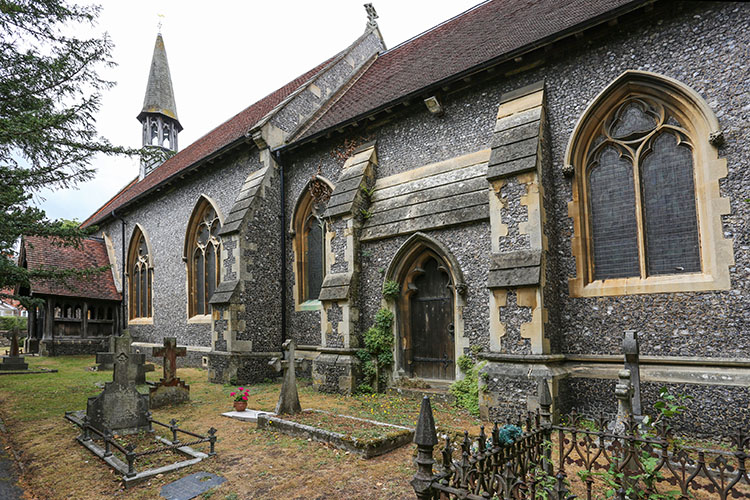 Looking along the South wall, we can see that the walls are covered in traditional Chiltern flints, and there are substantial stone dressings on all the corners and buttresses. At the far end of the Nave is a tall bell turret and a large South Porch. 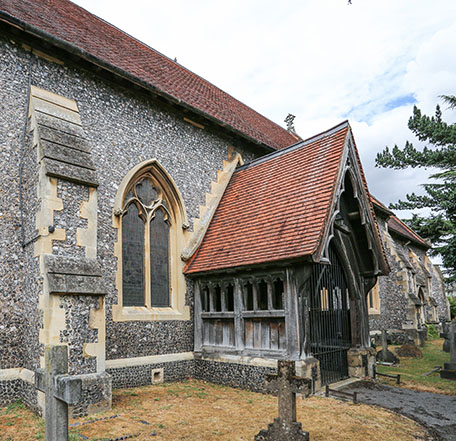 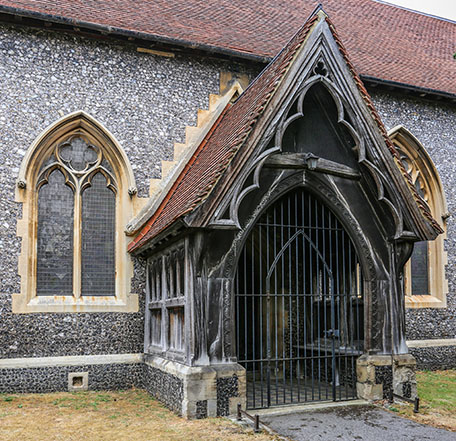 The South Porch is large in all directions, with its roof nearly reaching the top of the Nave wall. 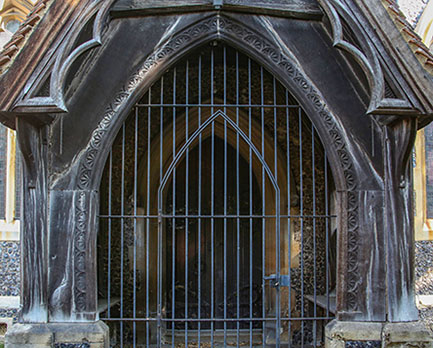 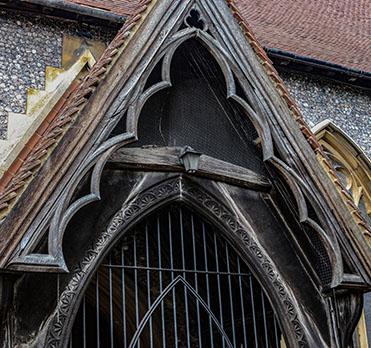 Some closer views of the woodwork decoration on the front of the porch. 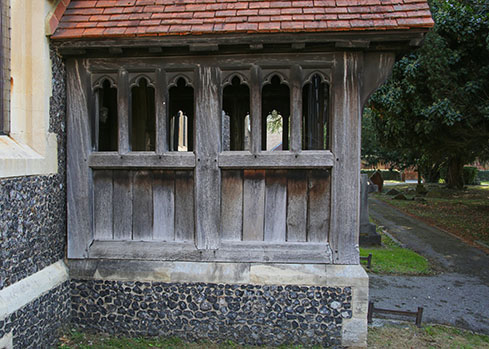 The path leading away from the South Porch leads to the Churchyard Lych Gate. 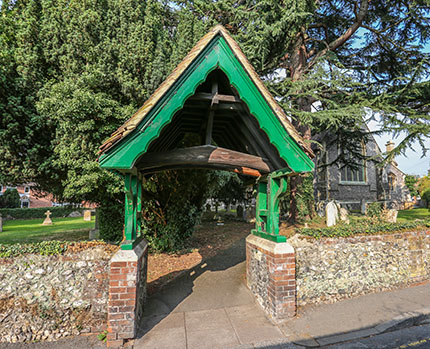 The road leading off to the left goes straight into the centre of the town. 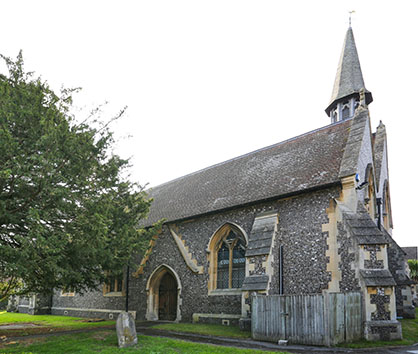 There is a matching doorway on the North side, where it was obviously originally intended to have another large Porch. Although some writers claim it could have had a North Porch which was removed. 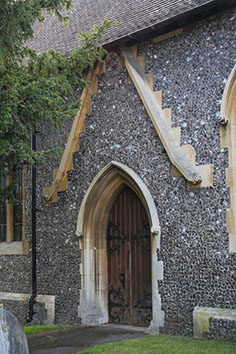 Here we can see that stonework was provided for the roof, the same as the Porch on the South side. 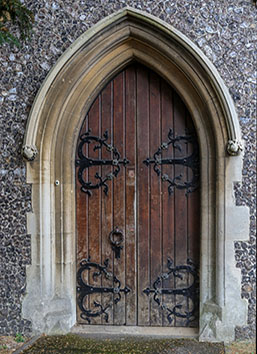 On the door we see how G G Scott's Gothic Revival work included fittings such as these elaborate hinges. 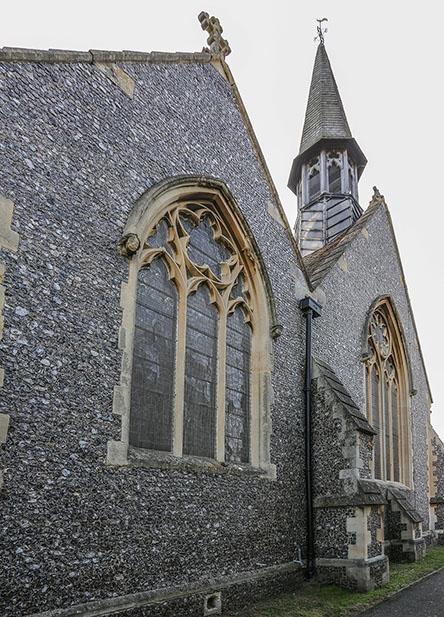 Looking at the West Wall, we see the two large windows of the North Aisle and the Nave. On top of the Nave is the Timber Bellcote.

The elegant Timber Bellcote is topped by its own slender spirelet.

The bell (dated 1852) was removed when the church was made redundant. The bell is now at the Marlow Museum. 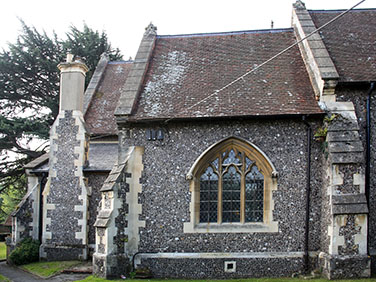 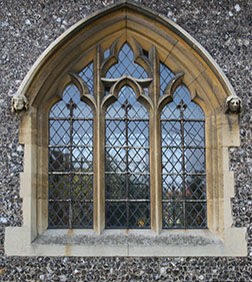 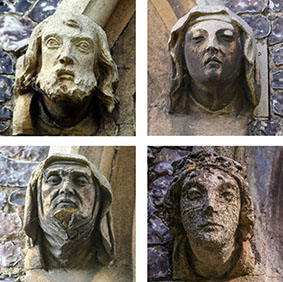 Here are 4 examples of label stop heads on the outside of Holy Trinity church.

Go up page to INDEX or TOP