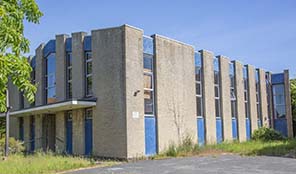 An Illustrated Article about the Guardian Angels Catholic Church, Southcourt.

The first Post-Reformation Catholic church opened in Aylesbury in 1892, a temporary iron church which was in use until 1935, when it was demolished to be replaced by the current St Joseph's church in Aylesbury High Street. With the expansion of Aylesbury in the 1950s, a site for a new church was purchased in Southcourt in 1952. But it was not until June 1963 that a timber Church Hall was opened at Southcourt, as a temporary church.

The early 1960s was the time of the "Second Vatican Council" which had a profound effect on the appearance of many Catholic Churches, and would surely have influenced the wide open space created inside the Guardian Angels Church at Southcourt.

Plans for a new church had been drawn up by the architect M J Plester, based on a concrete frame by Crendon Industrial Buildings of Long Crendon, and work started in January 1967. A great amount of the building work was done by volunteers, and the large building (around 28 metres, or 92 feet long) was opened on July 12th 1967, and actually in use by 1st October 1967. 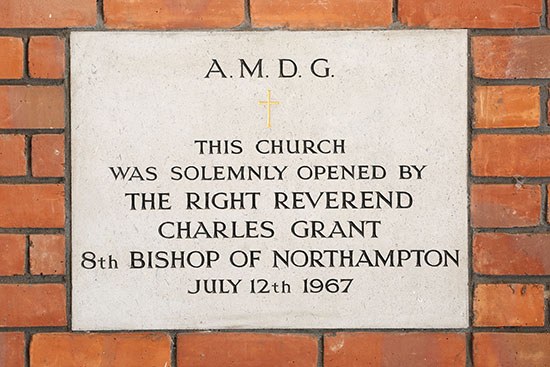 Plaque in the Entrance Porch. 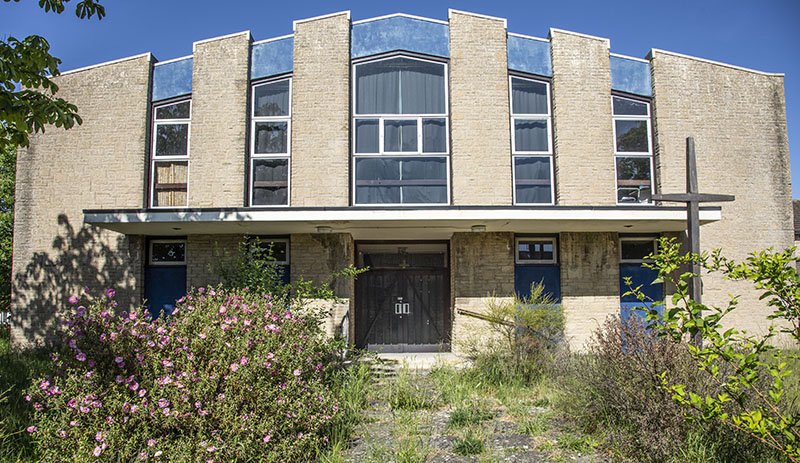 The entrance or West front (which actually faces WSW, as the church is aligned with the layout of the roads adjoining the site).

View from the SW. On the extreme right, is the first of two splayed bays which allow the East end to be lit by light from the West, making the East end brighter and the focus of attention from the rest of the interior. 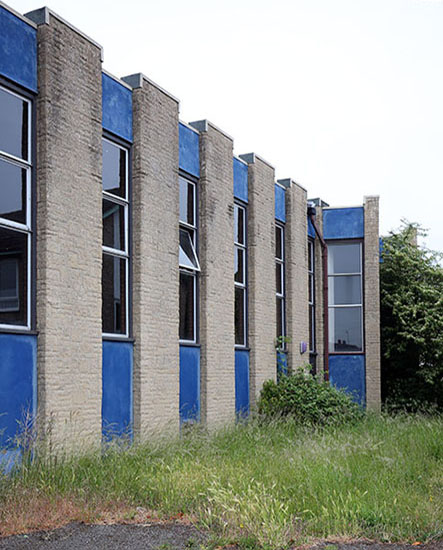 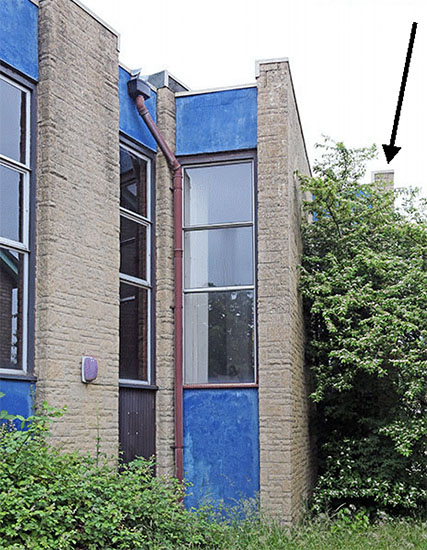 Top of 2nd splayed bay (arrowed) now behind a tree. 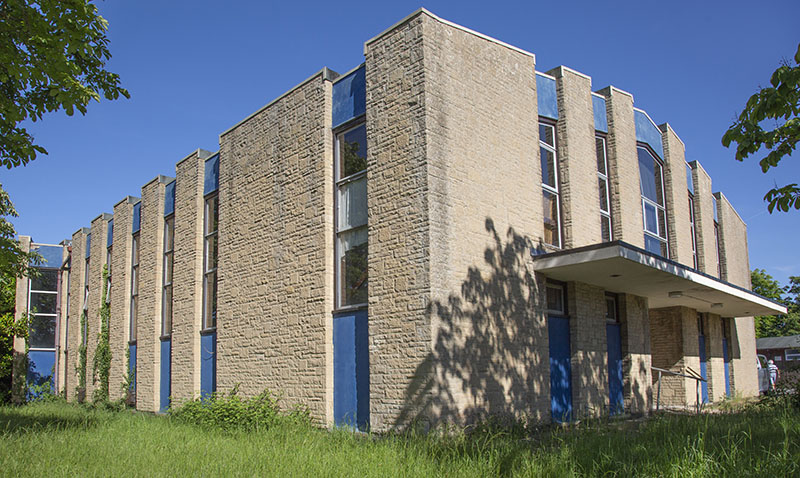 View from the NW. On the extreme left, is the first matching splayed bay. This feature is very reminiscent of Sir Basil Spence's Coventry Cathedral, which has five similar windows down each side of the Nave. The Anglican Cathedral had been completed in May 1962, less than 5 years before work started at Southcourt. 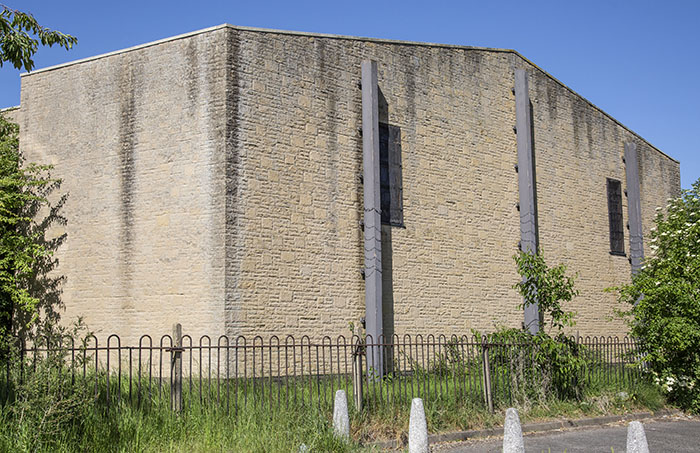 East end of church, looking rather austere, originally with just two windows, fitted with older glass. The metal columns are buttresses added at a later date to support the wall. 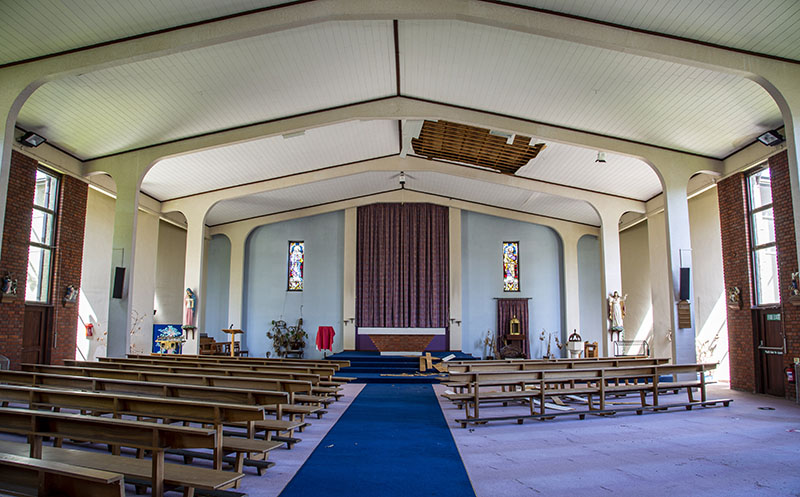 Looking East. The splayed side windows would have given an even brighter light to the E end, before trees grew in front of them. Statues on the side pillars are of Mary with baby Jesus and the Resurrected Christ. To the left of Christ is the font. These three items are shown in detail further down this page. 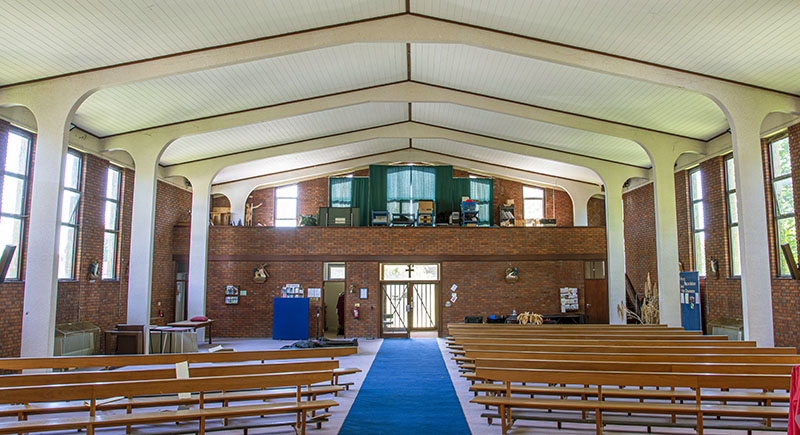 Looking West, with a Gallery over other rooms and the entrance door. The furniture and items on the Gallery should give a sense of the scale of the building. Some of the pews have been removed and put in the wooden Church Hall, which has been used as the church since around 2015. 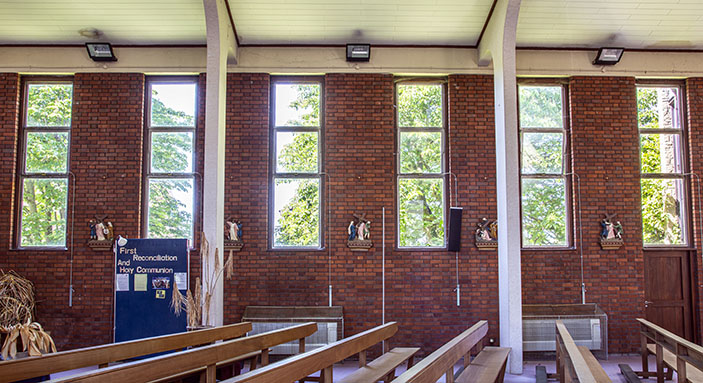 North wall with Scenes 2 to 6 of the Stations of the Cross visible between the windows. All 14 scenes are shown further down this page. 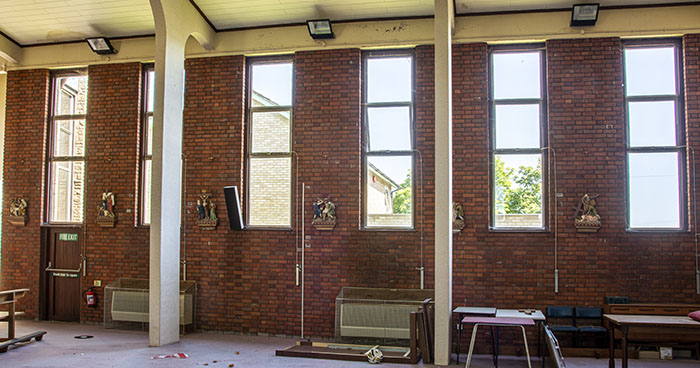 South wall with Scenes 9 to 14 (from right to left) of the Stations of the Cross visible between the windows. All 14 scenes are shown further down this page.

Some Fittings in the Church

Statue of the Blessed Virgin Mary holding the baby Jesus, on the North or left hand side of the Eastern end of the church. 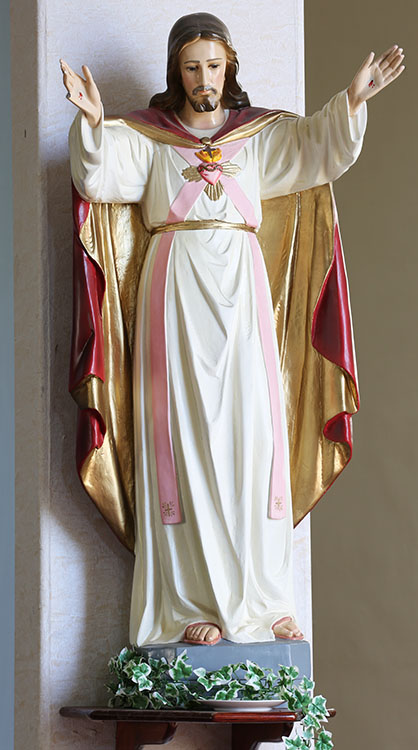 Statue of the Resurrected Christ, on the South or right hand side of the Eastern end of the church. 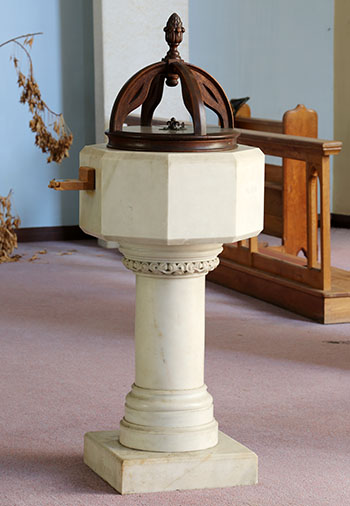 The attractive font, on the South or right hand side of the Eastern end of the church.

Stations of the Cross

The 14 Stations of the Cross are three dimensional detailed figures cast in Plaster or Stucco, in generally good condition, with only two having significant damage (Numbers 10 and 11). Their origin is not known, but they appear to have the character of being older than the church itself. The sequence runs anticlockwise around the church. It starts on the N side, in front of the statue of Mary. 1 to 6 are on the N wall, 7 and 8 are on the W wall, and 9 to 14 are on the S wall, with the final subject (Jesus being placed in the Sepulchre) appropriately in front of the statue of the Resurrected Christ. 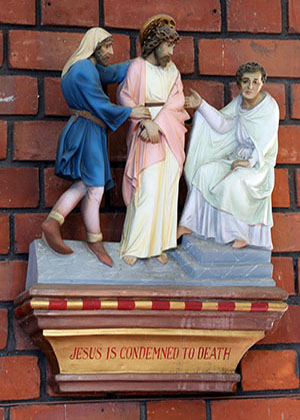 1 - Jesus is condemned to death 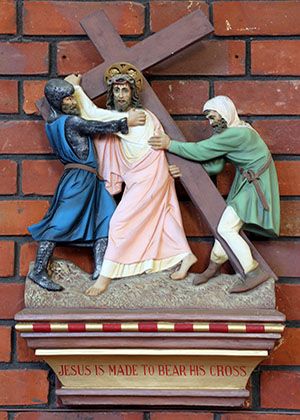 2 - Jesus is made to bear his cross 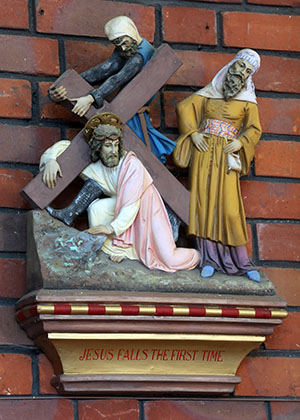 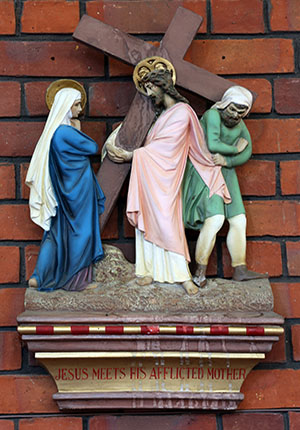 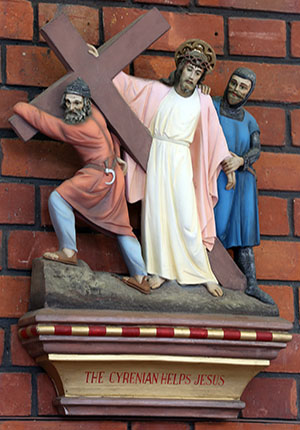 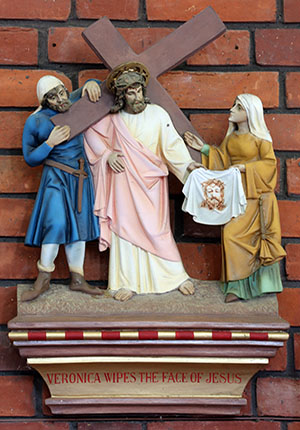 6 - Veronica wipes the face of Jesus 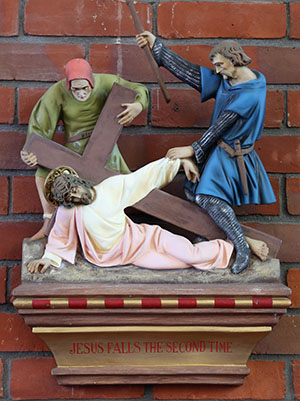 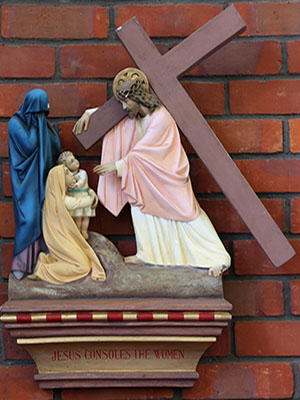 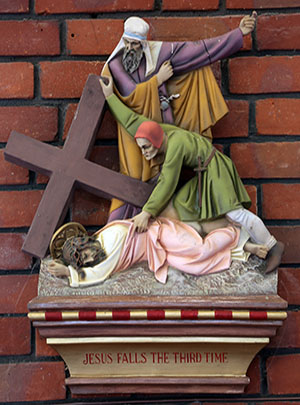 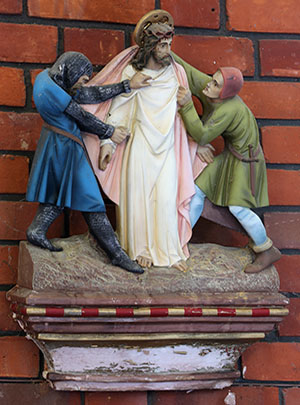 10 - Jesus is stripped of his garments 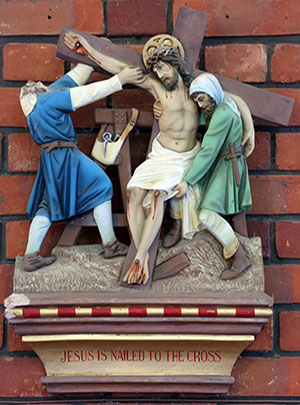 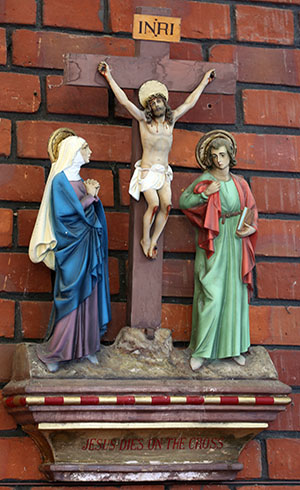 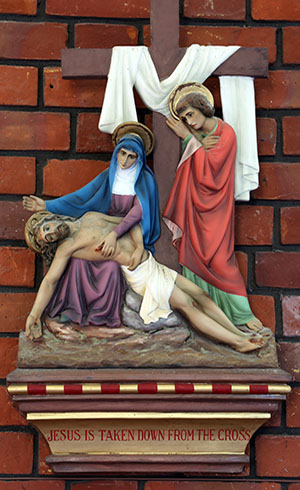 13 - Jesus taken down from the cross 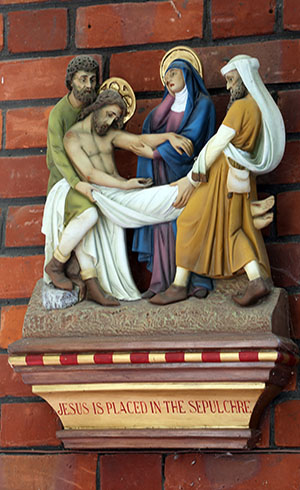 14 - Jesus is placed in the Sepulchre

The church was not used after about 2015 due to a partial collapse of the ceiling, whch revealed an asbestos problem, which stopped any interim repairs being possible. The church hall was then converted to use as a temporary church, for the second time in its life.

By then, there was a long list of repairs needed to the church, the hall, and the presbytery, which together would need funds of around £1.5 million. In a time of declining congregations those sort of funds would be impossible to raise, especially as the church was now too large for its congregation. The decision was therefore taken to close the whole site which would be sold for redevelopment for affordable housing.

I can only hope that at least the fittings I have shown above (statues, font, stations of the cross) and particularly the two pre-1914 stained glass windows can be preserved somewhere for the future, and act as a reminder of what was a very modern and different Catholic church of the 1960s, with the unusual name of Guardian Angels Church.

The Church, Presbytery, and Church Hall, in June 2020.