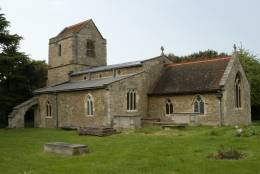 A major restoration including new roofs was done in 1868 when the Chancel Arch was widened. Another restoration was carried out in 1903 by the architect Edward Swinfen Harris.
Images of some of the Notable Features in St Lawrence, Bradwell, Old (MK)

A couple of the images on this page will be improved in the future.

The Patron of St Lawrence's church for 385 years was Tickford Priory at Newport Pagnell. The Priory was founded in 1140 and the Advowson for Bradwell was given to them. Crucially that was 14 years before Bradwell Abbey was founded in 1154, they would have been the logical Patron, so it is obvious that Bradwell church was founded long before the middle of the 12th century.

The South Doorway (blocked up in the 1960s) has a round head and is certainly Norman work. The South Arcade is a very interesting piece of Transitional work showing the change from the Norman style to the Early English style.

Tall pointed arches stand on two short but solid circular columns, on moulded bases. The abaci are square to accommodate the very plain arches above. The lower parts of the Capitals change the square format to circular for the columns below.

The Eastern one was obviously built first, and has very flat-leafed foliage, looking like an early attempt at carving. However the Western one is more refined, much of it having prominent stiff-leaf foliage, and even a head appears, facing the Nave. The work probably dates between 1190 and 1210.

The Norman South door was probably moved out to its current position when the S Aisle was widened, about 1260 or soon after. The Tower was built about 1380.

After the Dissolution of Tickford Priory in 1525, we can consider that Bradwell church can be considered, perhaps unusually, to be lucky to eventually fall into the hands of King Henry VIII. He granted the bells and other materials from another dissolved Priory, Snelshall, which was 5 miles to the South, near Whaddon. The materials were used to build the Clerestories with their 3 tiny windows on each side, as well as the North Porch, and also to strengthen the Tower to contain 4 bells that came from Snelshall Priory. One bell dating from c1490 was repaired in 1907, but failed again in 1970, when it was given a home for its retirement hanging inside the church at the E end of the S Aisle, surely well deserved after nearly 500 years work. However, two of them date from c1297, and are still rung by full-rotation, amongst the oldest in the world to still be used that way. The very oldest is believed to date from 1260, and is at West Tytherley in Hampshire.

During the following 300 years Bradwell church seems to have received more care and attention than many other churches.

Restoration work was done in 1867-8, which included re-roofing the church. Another project followed in 1903, the latter by the local Architect Edward Swinfen Harris. Both of these schemes were heavily influenced by members of the Baily family, who are mentioned again at the bottom of this page.

Subsequent work was mainly in the 1990s, when an extension was built to the North of the Tower, cutting a new doorway through the Tower wall. The Gallery was added in the Tower, to form a new ringing floor to enable access below it, between extension and church. The church was then re-ordered, removing the 1867 pews and wooden floor, laying a new floor, for new chairs enabling flexible interior layouts.

Exterior from North, with North Porch, and modern extension on the right. 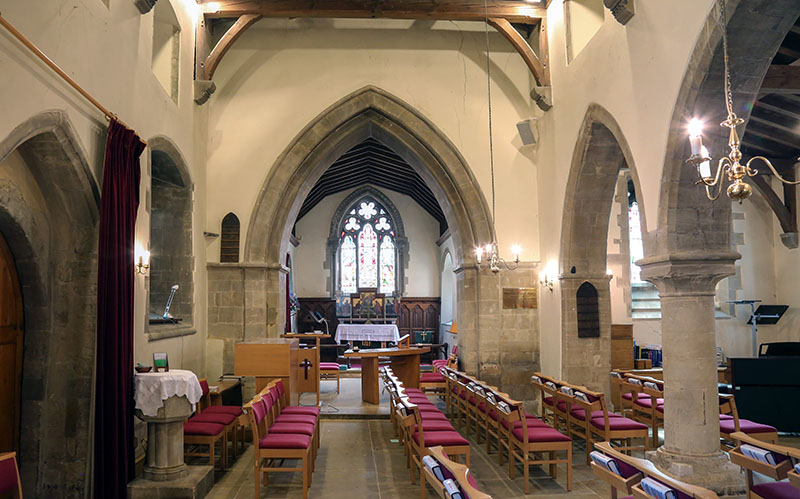 Interior looking East, through Chancel Arch which has a very rare inscription recording the church's dedication, but unfortunately the date is incomplete. The Chancel Arch was widened in a restoration of 1867-8, parts of the old arch being used to enlarge the East window. 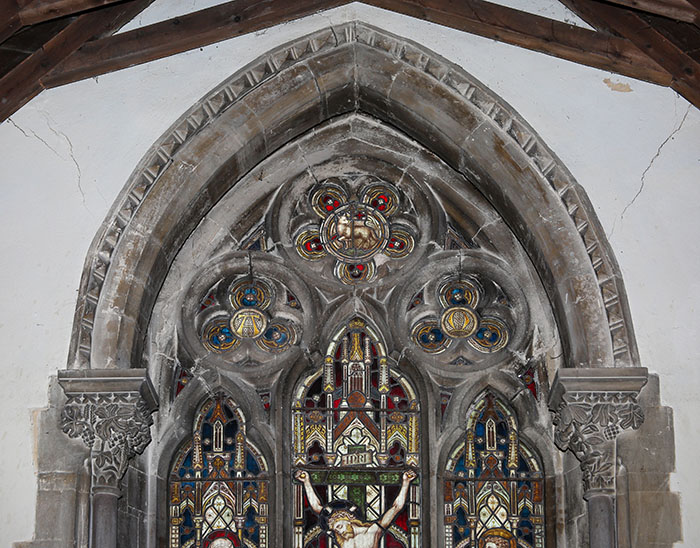 Top of the East window, with stonework from the old Chancel Arch, including the nail-head surround to the arch. The arch rests on an ornately carved pair of capitals. 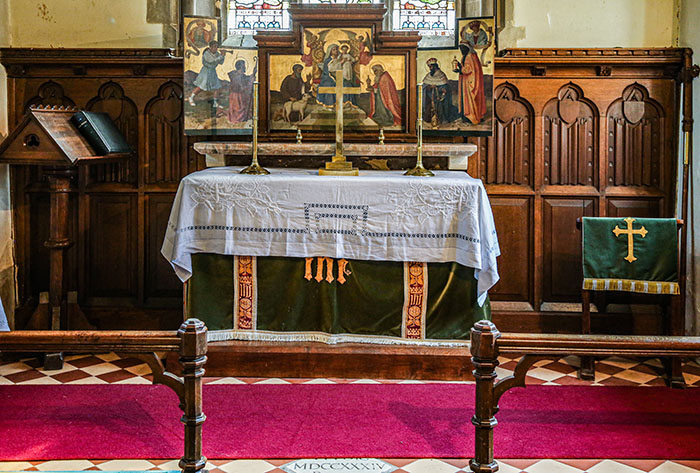 Below the East window is the altar, backed by wooden panelling with a grid-iron motif for St Lawrence, and above the altar is a painted Triptych. The Sanctuary still keeps its Victorian character, even if the rest of the interior was modernised 128 years later. 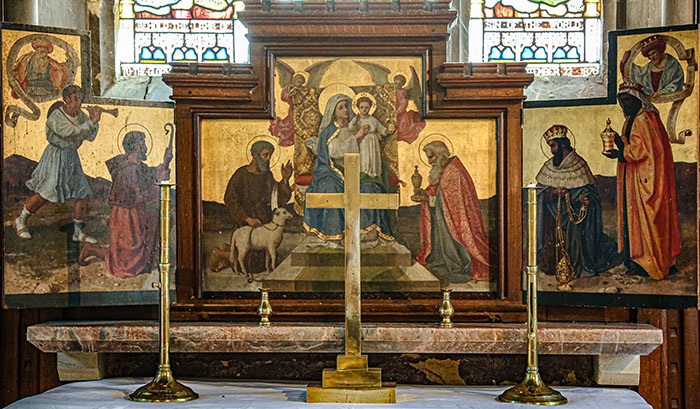 The Triptych dates from the 1867-8 restoration, and shows the Adoration of the Magi, and the Shepherds, together with the Holy Child in his Mother's arms. It was painted by Nathaniel Westlake, whose company, 53 years later, made the impressive Tree of Jesse window at the W end of the S Aisle. 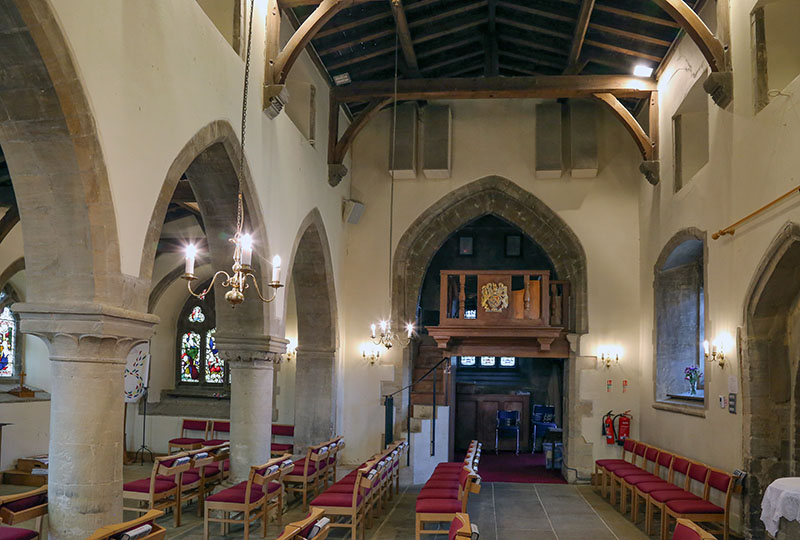 Interior looking W, from the Chancel Arch. When the modern extension was added to the North of the Tower, the Tower had to become an access route, so a new Ringing Gallery was built as a new storey, but it also blocks off the west window. 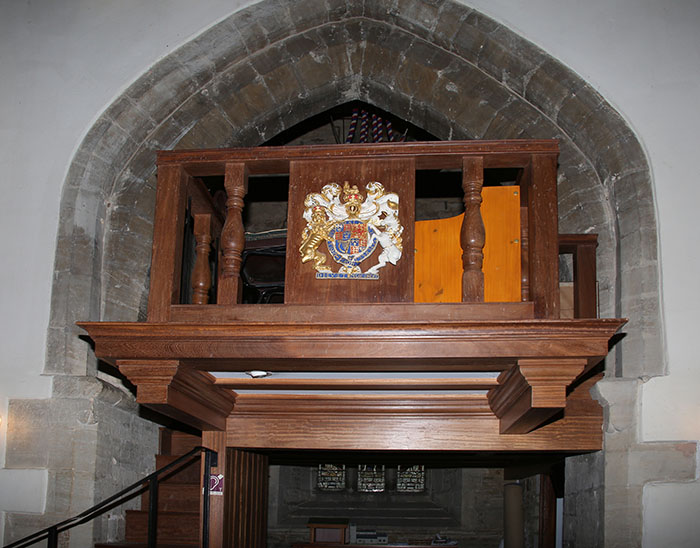 Closer view of 1995 Ringing Gallery, which carries the 17th Century Royal Arms of King Charles 1st. They were carved from one piece of oak which was bare wood for over 300 years until the artist Harry Stammers painted it in 1966. He was then a churchwarden at Bradwell, and also made 4 stained glass windows for the church. As described above, the tower arch had been rebuilt in the 16th century, but here it can be seen that the upper and lower halves do not match each other. 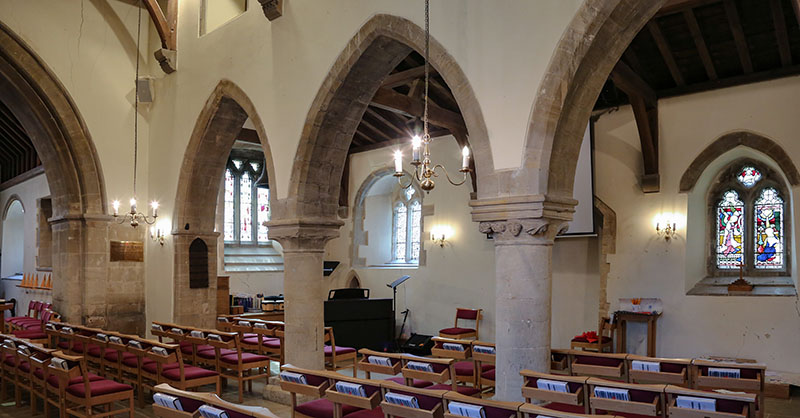 Looking through the Arcade into the S Aisle.
The Arcade is an important piece of work from the time when the Norman style was being adapted into the Early English style. It has very plain pointed arches, supported by round piers with Capitals that are splendid transitional work, dating from around 1190-1210. 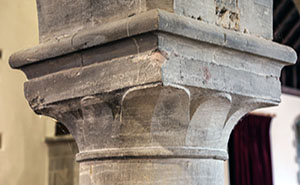 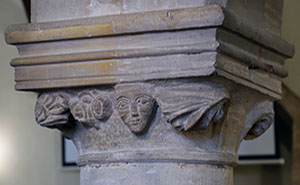 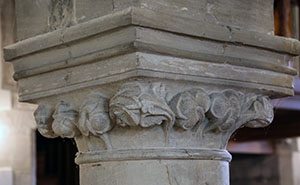 These views show how styles and stone carving skills developed as work progressed. 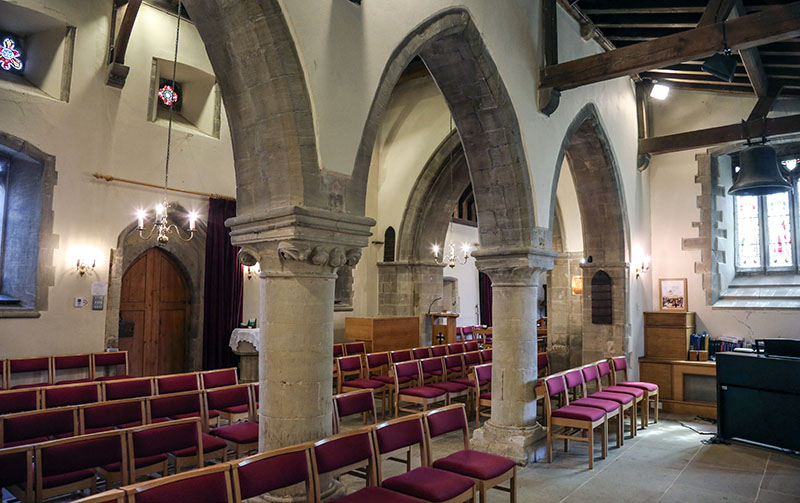 The S Arcade again but this time seen from the S Aisle.
You can also see 2 of the tiny clerestory windows, at the top of the N wall, on the left.
On the right a bell hangs in front of the window, it was one brought from Snelshall Priory, and now spends its retirement years in relative peace.

In 1787 William Baily puchased the Manor of Bradwell, and his family would remain involved with St Lawrence's church for a long time. In fact, 80 years later a descendant Kitelee Chandos Baily would become the Vicar of Bradwell for 52 years. The Baily family instigated both the 1867 and 1903 restoration projects. Some details of the work done has been mentioned throughout this page.

I think that in 1867 the Baily's must have had a great desire to fill all 16 windows of the church with Stained Glass. This is a trend we have noticed in a few other churches in Buckinghamshire. Some memorial windows were fitted, but all others seem to have been filled with Powell quarries. They only now exist in one window and all the 6 small clerestory windows (with 3 others being replaced by Harry Stammers in the 1960s).

We can still see the following 5 windows in memory of members of the Baily family:

All the windows of this church can be seen on the Stained Glass pages of this website, please click here 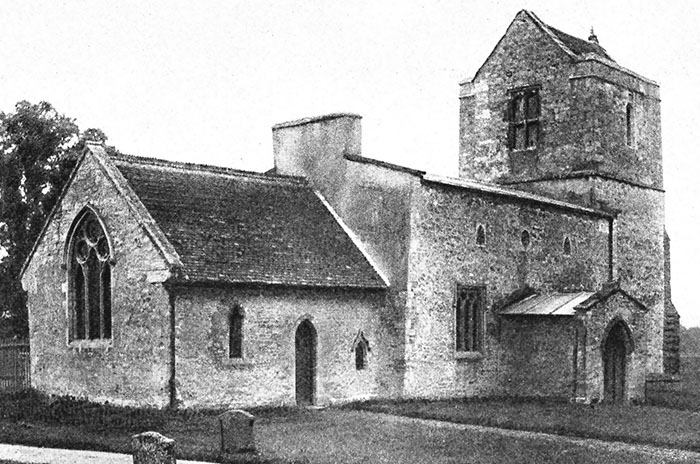 Records of Bucks 1904, with an article by Edward Swinfen Harris

This shows the church just before the 1903 restoration. This North side looks very similar today, the main difference being the removal of what Edward Swinfen Harris termed "an excrescence over the Chancel Arch" which he had thought might have supported a Sanctus Bell, but that apparently proved not to be the case. He wrote that it had been built up with rubble and mud. 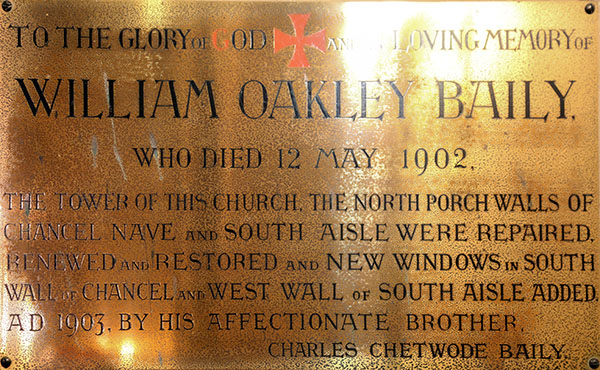 This plaque remembers William Oakley Baily who died in 1902. It details the 1903 restoration project (the work of Edward Swinfen Harris) and tells us that the work was done in memory of Willam Oakley Baily, donated by his brother Charles Chetwode Baily.

Edward Swinfen Harris's work in 1903 included strengthening the W end of the S Aisle, including building the unusual flying buttress, seen below. It had to be 'flying' to avoid a new drain that had been built around the wall of the whole church. In the 1920s the buttress was filled in, extended and used as a shed and a boiler room, as seen on the left below. It was opened up again in the early 1990s, as seen on the right below. 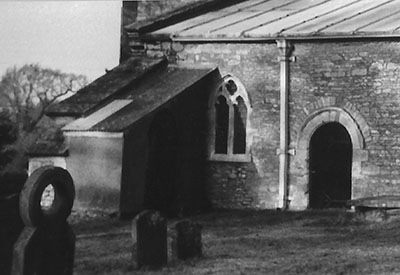 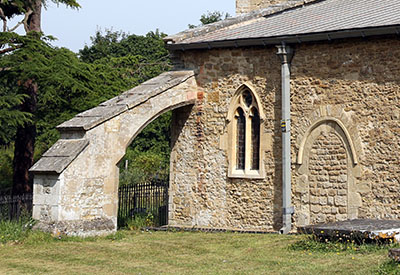 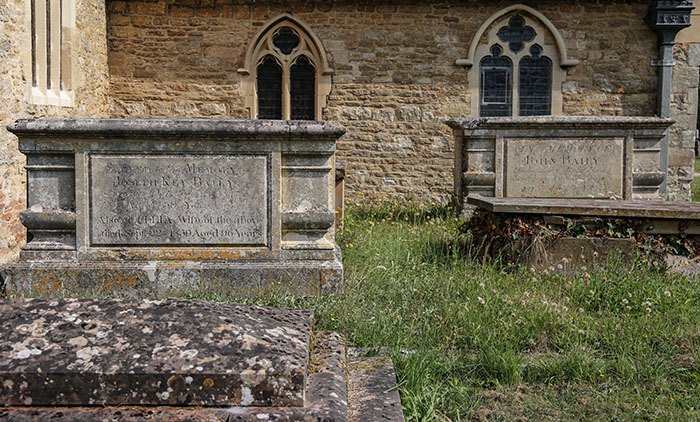 The Baily Family tombs, to the South of the Chancel. They were once surrounded by iron railings, which were requisitioned during WW2.