Images of some of the Notable Features in St Peter, Ilmer

An Illustrated Article about St Peter's Church, Ilmer - Page 1 of 3

The church dates from the 12th Century, from when its Norman South Doorway (now blocked) can still clearly be seen on the outside wall, but not inside the church. The North doorway dates from the 13th Century, but other parts of the church seem to have been rebuilt around 1350, when the Chancel was probably enlarged. Many features survive from that time, particularly some of the Chancel windows, and possibly the Font. The church has a simple plan of Nave and Chancel, but in the 14th Century a small Transept was added to the South side of the Nave. The arch that led into it can still be seen from outside and inside. The expansion and rebuilding of the church was presumably done before the Black Death of 1349, as the population of Ilmer was apparently far less after the Black Death than before it.

In 1662 a licence was given to demolish the Transept (perhaps then being used as a Vestry). At some time the open arch was converted into a window, which is a similar size to the late 15th Century window opposite, on the N wall of the Nave. Otherwise, the Nave does not seem to have had any other windows, and particularly the Western half still remains incredibly dark, only lit by a window in the thick West Wall. There is only a timber arch between Nave and Chancel, which marks the end of the Victorian roof of the Chancel. However beneath it there is a stone wall carrying a good timber screen from the late 15th Century.

One important medieval feature is the bell turret of the 16th Century, whose original timber framework survives, including its impressive moulded wall-posts, which are within the West end of the Nave.

By the early 19th Century the church was in poor condition, which was really quite common. A new Vicar was appointed in 1834, the Rev William Edward Partridge, who also became the Patron of the church in 1858. He immediately put in place his plans for the restoration of the church, bringing in the Diocesan Architect, George Edmund Street. Street rebuilt much of the Chancel, repaired the Nave, and re-furnished the church. There are features such as the Reredos, and the Litany Desk, which are unmistakeably Street's work. The church was re-opened on 30th August 1860 by the Bishop of Oxford.

In 1909 restoration work was done on the bell turret and the bells, and an elegant narrow spire was added to the bell turret, rising from a new pyramidal base. Such spires are sometimes called "needle-spires". 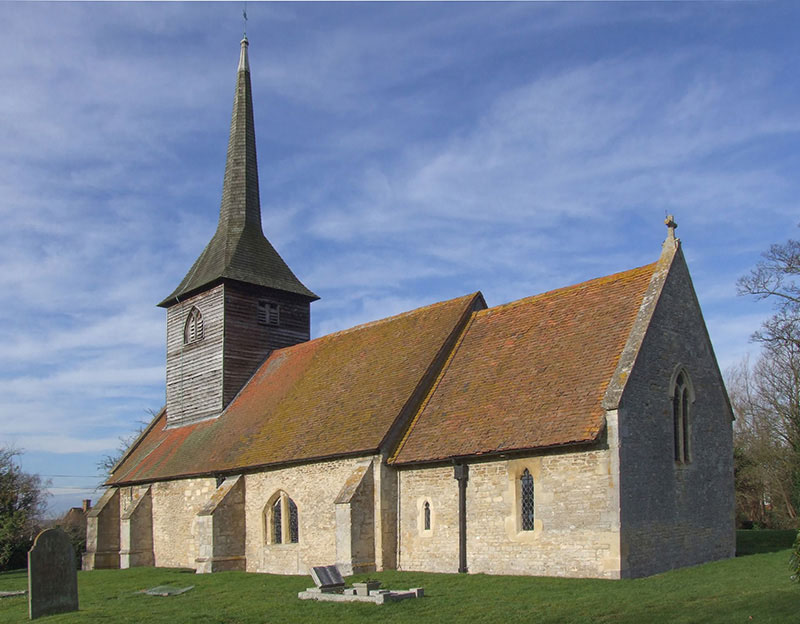 View of church from SE.

South side of church where we can see there is only one window in the Nave and two in the Chancel. However there are two features of the Nave wall of special interest. 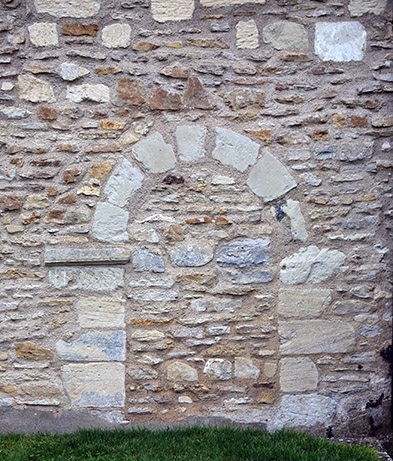 Blocked Norman South Doorway of the 12th Century. This proves the date of the original church. 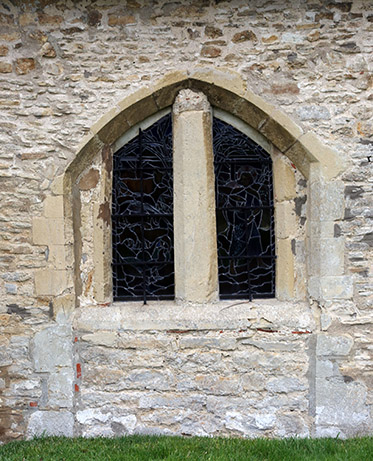 14th Century Arch to a Transept which was demolished in 17C, the arch was re-used as the only window on the South side of the Nave. 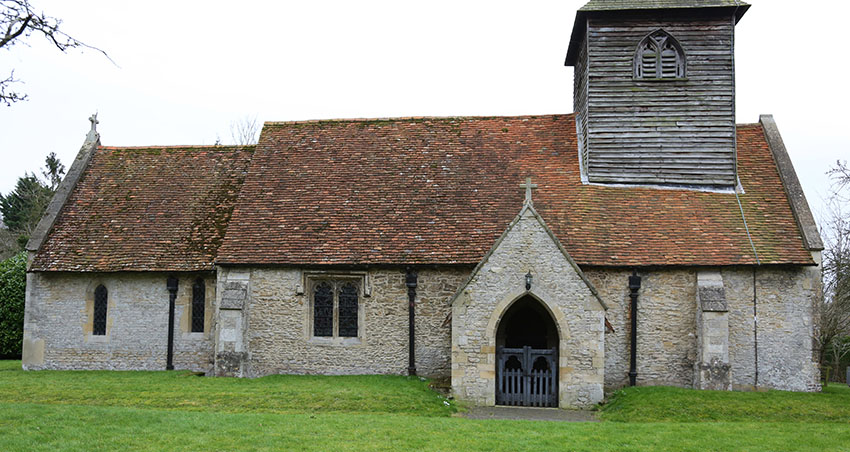 North side of church where again we can see two windows in the Chancel, but only one in the Nave. 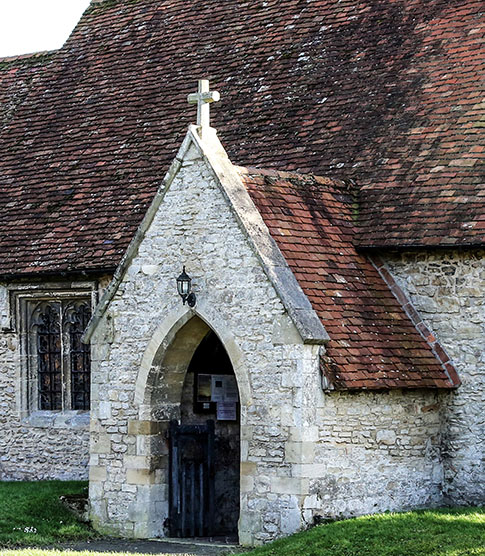 North Porch which was added in the 19th Century. 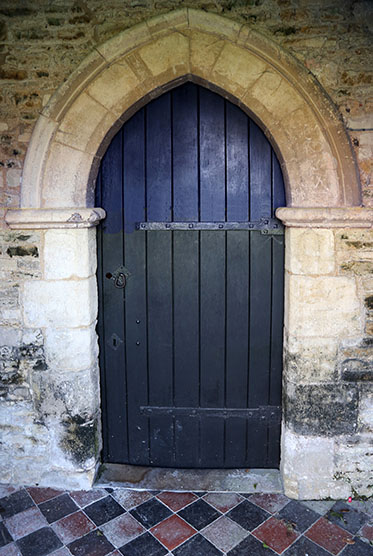 However, inside the North Porch is the 13th Century doorway. 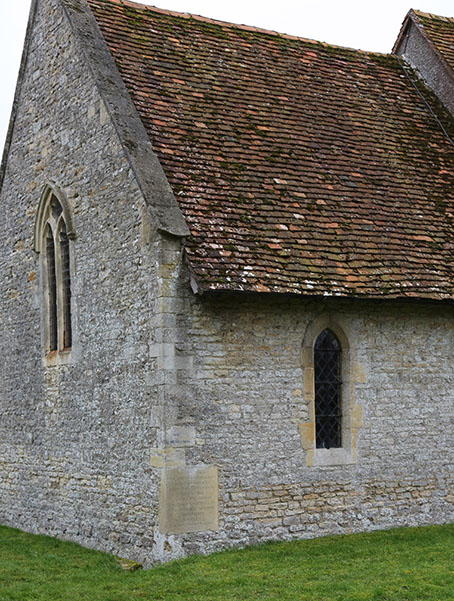 Chancel from NE, having been rebuilt in 19C, it has a much more regular pattern of stonework than the Nave. 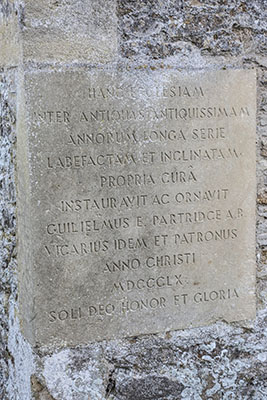 Restorations are sometimes recorded inside a church, but not often outside. It is in Latin. 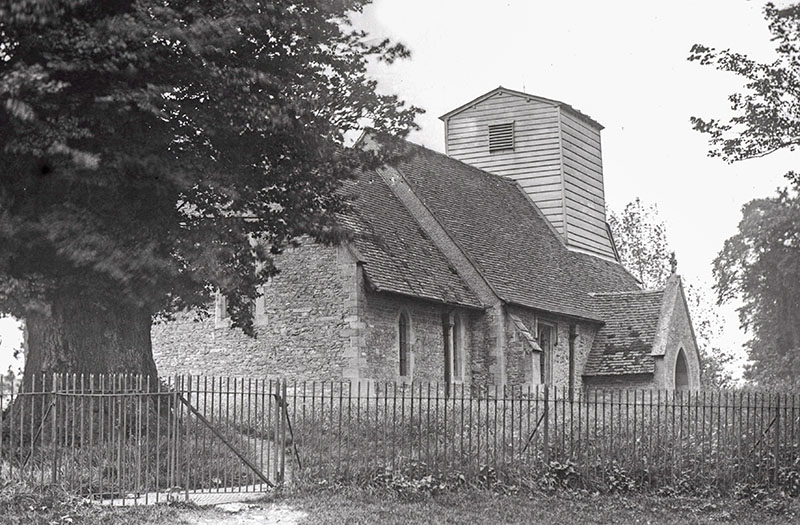 This photo of 1903 was taken by Stanley Newton, who was actually photographing the construction of the Great Central Railway. Crucially it shows that the late 16th Century Bell Tower had no spire. 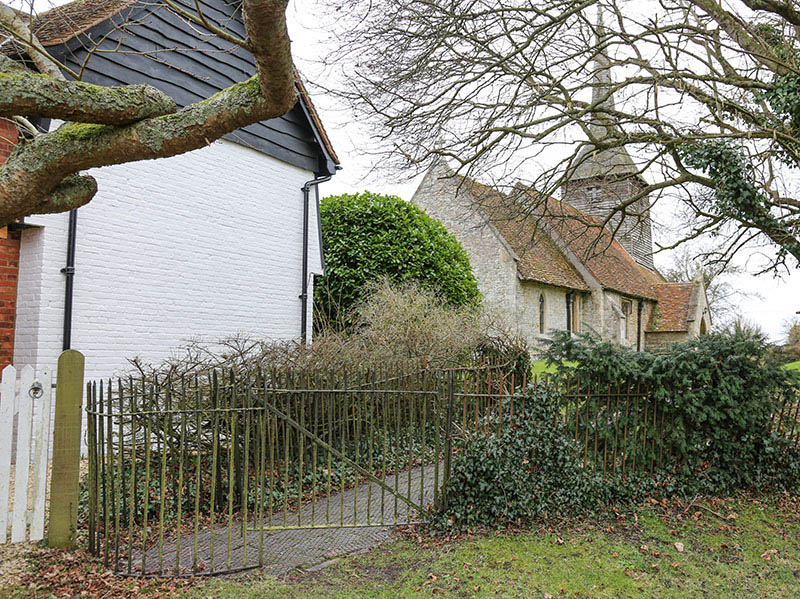 In this equivalent 2022 photo, the trees have changed, the Old Vicarage has been extended, and the Bell Tower had its narrow spire added in 1909. Although the iron railings and gates have not changed since 1903. 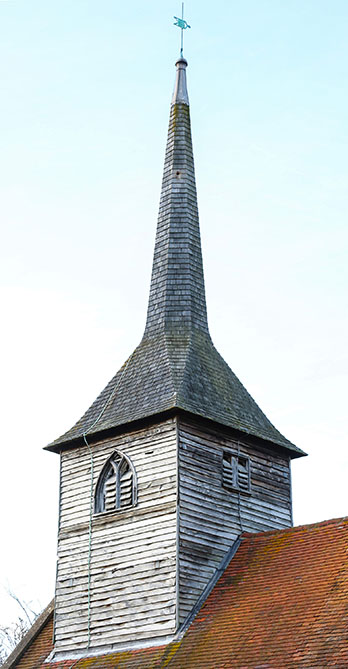 The Bell Tower was added around the end of the 15th Century. It has 3 bells which date from c1500, 1586, and 1618. To accomodate the spire, in 1909 the roof of the tower was changed to a pyramidal shape forming a gracious base for the narrow spire. This type of spire is often called a "Needle Spire".

The Tower rests on an impressive wooden structure inside the West end of the Nave, that has now been doing its job for around 500 years. The structure can be seen on Page 3.


Go up page to INDEX or TOP