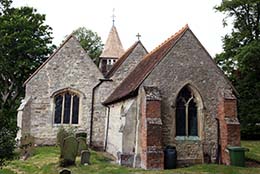 An Illustrated Article about All Saints Church, Hulcott - Page 3 of 3

The items described below are roughly in chronological order of the dates they would have appeared in the church. Fittings are generally fixed items or those built into walls, etc. Furnishings are generally more portable items. However, sometimes there are not clear differences between them, so they are all included together here. 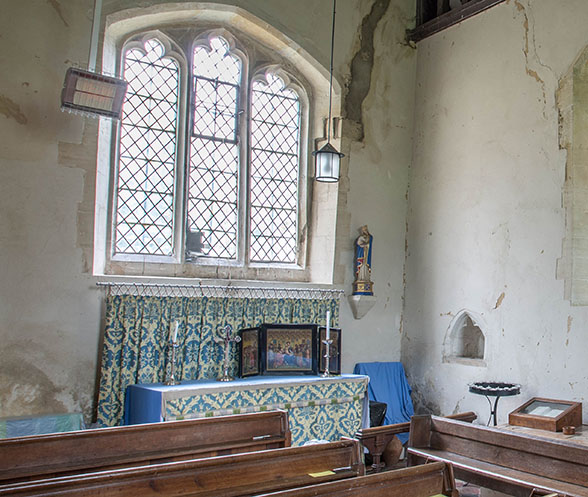 This view shows the end of the S Aisle, where a Piscina is in the usual position to the right of the Altar. It probably dates from the 1330 building of the Transept or Lady Chapel. 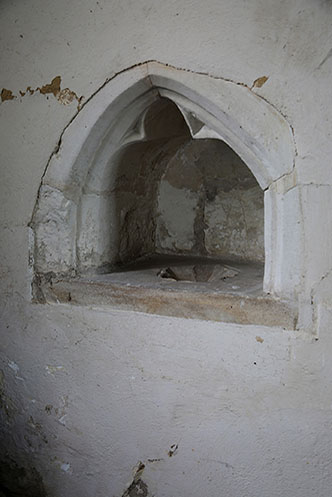 The Piscina was later reset in the wall of the newly built S Aisle, in the early 16th Century. 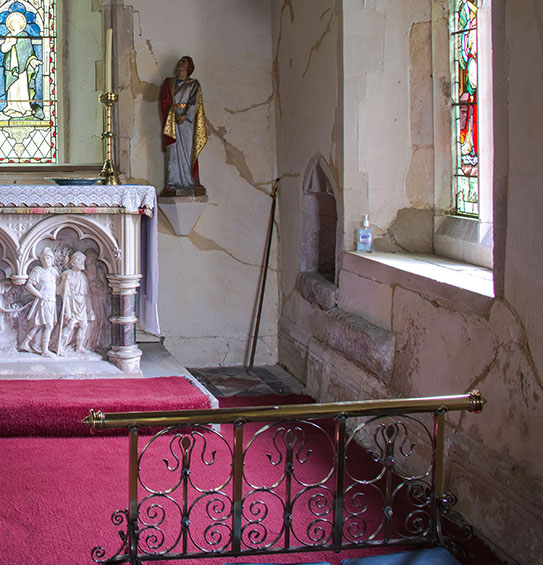 This view shows the SE corner of the Chancel, which was rebuilt c1340, with its original Piscina beside the S window. Below the left hand half of the window is a stone that could well have been the base of an original sedile (or seat) below the window. 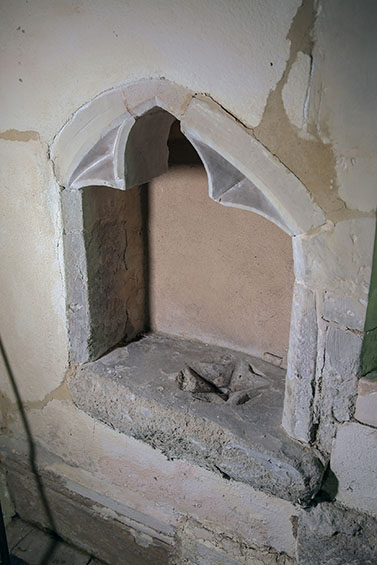 The Piscina has an unusual star shaped bowl cut from the stone base.

There must have been a medieval Rood Loft across the Chancel Arch, as it has two pieces of evidence surviving. 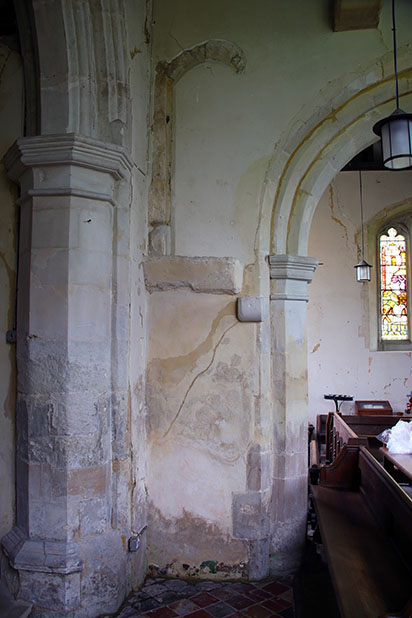 On the short section of wall forming the Eastern Respond for the Arcade, there is a blocked high level archway which would have been the access up to the Rood Loft. 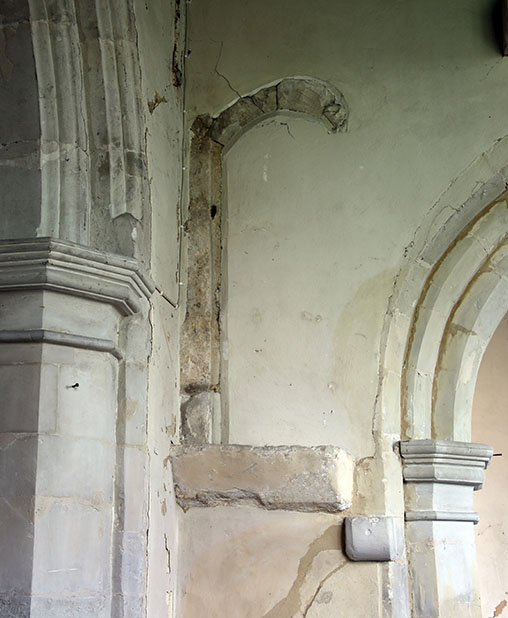 Just below and to the right of the sill of the archway is a corbel which would have been a support for the Rood Loft across the church.

One of the largest impacts of the Victorian Restorations was on the seating in a church. George Edmund Street's Restoration of 1861-1863 was no exception, as the previous box pews were replaced by shorter open pews. This was not usually done to aid comfort, but to increase the total seating, and very often to remove the exclusivity of private box pews, which would have been paid for by the wealthiest families. Below are two views of Street's Open Pews. 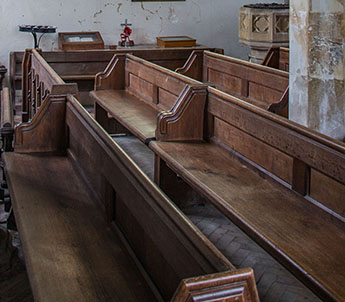 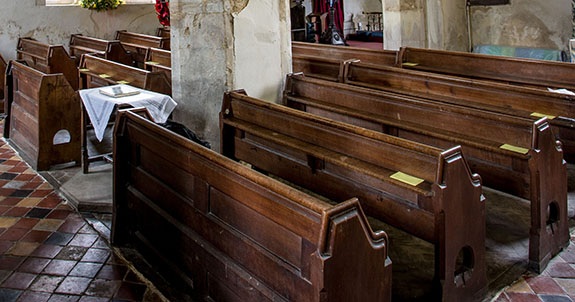 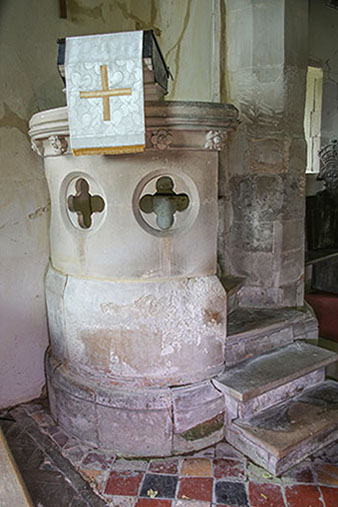 Street's work also included a new Pulpit. This one is very characteristic of his Pulpits which are always very solid structures, whether they are made of stone or wood.

Pulpits sometimes have hidden comforts. This one has a wooden seat set in a curved recess cut from the wall. 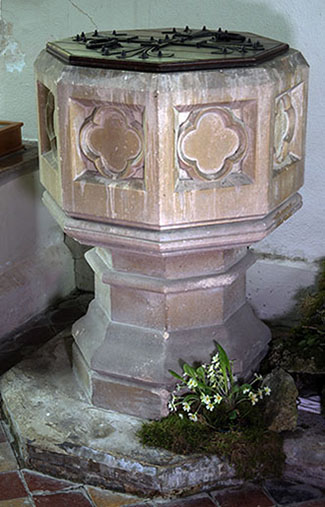 Of course, Fonts are nearly always very solid stone structures, and Street's font here at Hulcott is no exception. However, he only replaced the bowl, re-using an older pedestal. 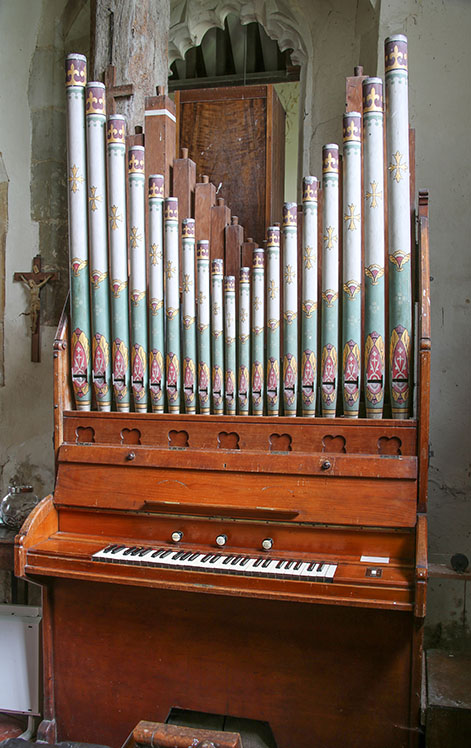 Hulcott's organ was made around 1875 by Thomas C Lewis. It now stands in the SW corner of the Nave, in front of the old window opening that leads through to the Vestry in the S Aisle. 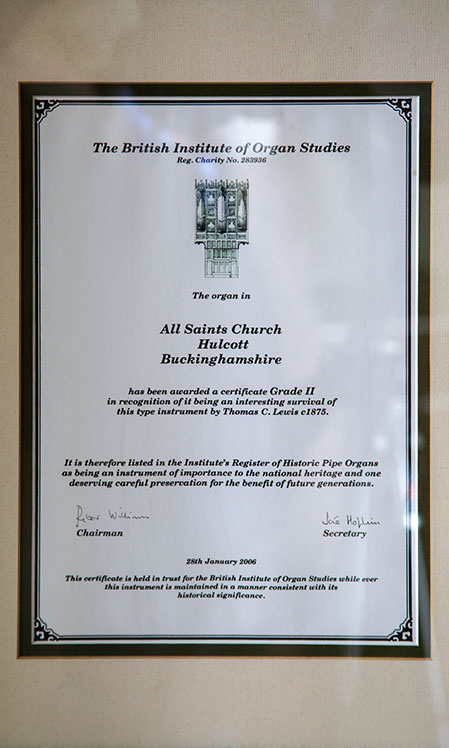 This certificate states that in 2006 the Organ was listed by the British Institute of Organ Studies as 'an instrument of importance to the national heritage and one deserving careful preservation for the benefit of future generations'. 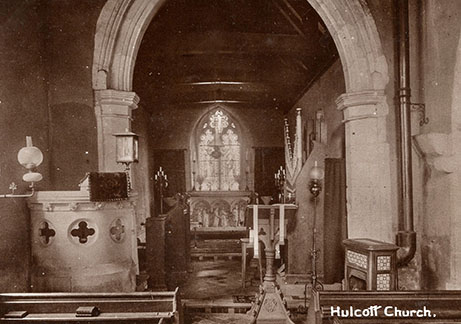 This is a postcard, estimated to be from around 1910. 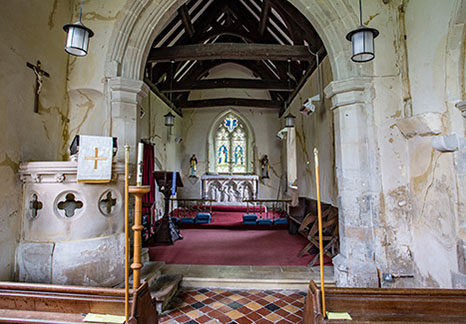 This is a comparative view taken in April 2018.

The Pulpit is, of course the same, and the unusual Lectern, shown under the Chancel Arch, is now on the left in the Chancel. The Organ is in the Chancel on the right, which we have already seen is now at the opposite end of the church. Obviously the heating system is completely different, with what looks like an open stove on the right, with a flue disappearing up to the roof. However, the stove itself undoubtedly has more decoration than the current electric heaters. One thing is clear to see in both photos, the elaborate altar, which we will look at next.


Go up page to INDEX

The Sanctuary was re-fitted by Rev Edward Bonus. He was Rector at Hulcott from 1864 until he died in 1908, as well as being Rector at Buckland from 1860. He seems to have been a pretty domineering person, using his wealth to get his own way. However he did spend a lot of his own money on both churches. He is often credited with designing and donating new Altars for Buckland and Hulcott, in fact similar Plaques in both churches state that he did. Whilst he certainly donated them, some experts question how much he might have actually designed the Altars, as apparently there are other similar examples which are fairly standard productions from Italian Marble Workshops. The architectural elements of both Altars are very similar, but the Buckland one also incorporates a Reredos. 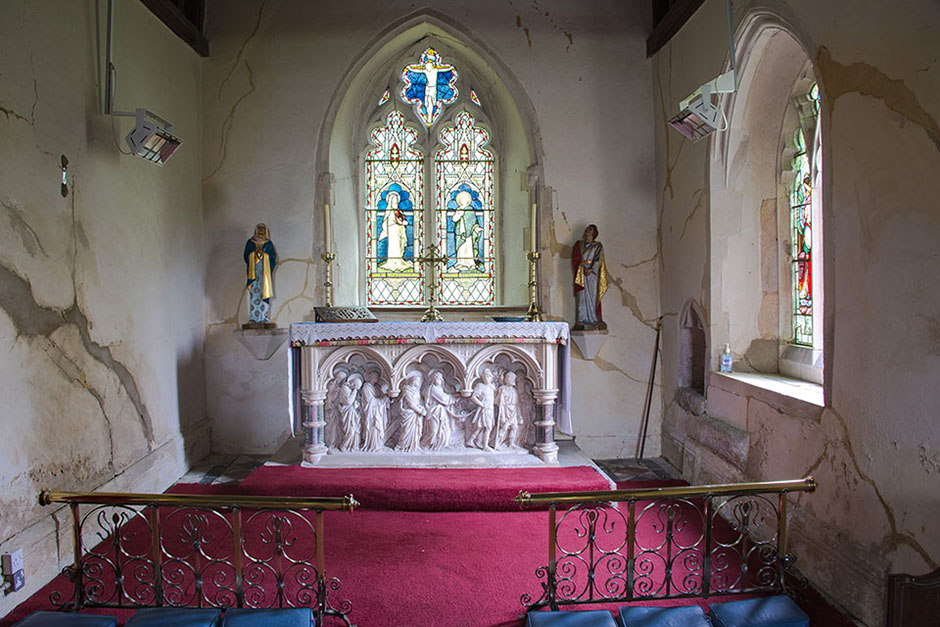 The sculpture across the Altar portrays Christ Carrying the Cross. This scene has many other names, such as Procession to Calvary, Road to Calvary, Way to Calvary. There are also many ways that the scene has been portrayed in different art forms, and with different people in the scene. 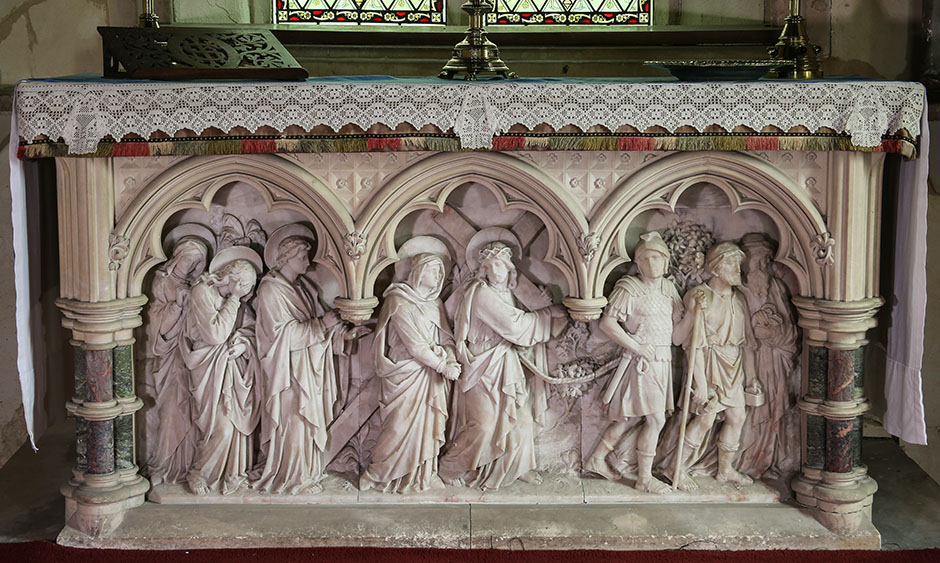 Below are some slightly larger images of the 3 panels of the sculpture. 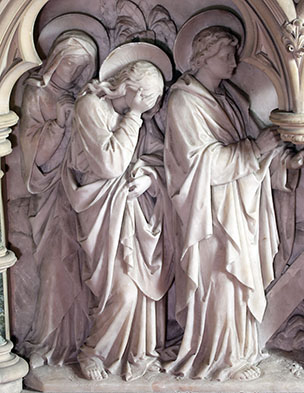 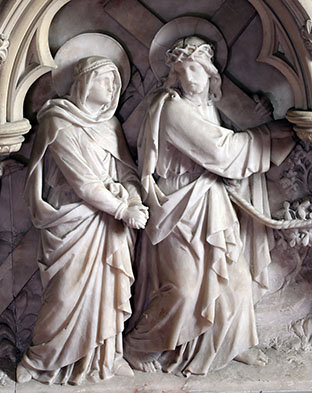 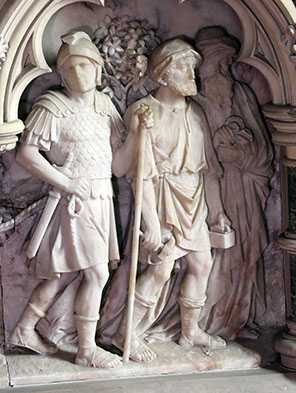 Apart from two windows dedicated to the mother and wife of Rev Edward Bonus, All Saints Church only has three monuments for individuals within the church. The only people who were normally entitled to be buried and have memorials within a parish church were usually the clergy and local landowners including, of course, the Lord of the Manor, together with their families.

Regarding clergy, at Hulcott it seems that they often moved elsewhere, or were also connected to other churches where they were buried. However it is known that four Rectors were buried at Hulcott in the 17th Century, and two in the 19th Century.

Regarding landowners, certainly in medieval times, Hulcott only ever had single landowners, who were the Lords of Manor. However over the centuries it seems that only two families made their home in the parish. Benedict Lee was Lord of the Manor from 1472 to 1535, and it seems certain that Lee had the South Aisle added to the church. He apparently left instructions in his will that he wished to buried in the S Aisle, where we still find his tomb (see just below). The Fountaine family were then Lords of the Manor for over a century, and many of them were buried at Hulcott.

Therefore at least a dozen people were buried at Hulcott who would have been entitled to burial within the church, but for most of them we do not know whether their burials were in the church or the churchyard. It is most likely that some would have been inside the church, and particularly in the 17th Century could have been marked by ledger slabs. However there are no records of any, although the Victorians sometimes destroyed or buried floor slabs, preferring clean and tidy flooring such as the Minton Tiles put in the Chancel at Hulcott by Street in the 1860s, which themselves are now covered by carpet. 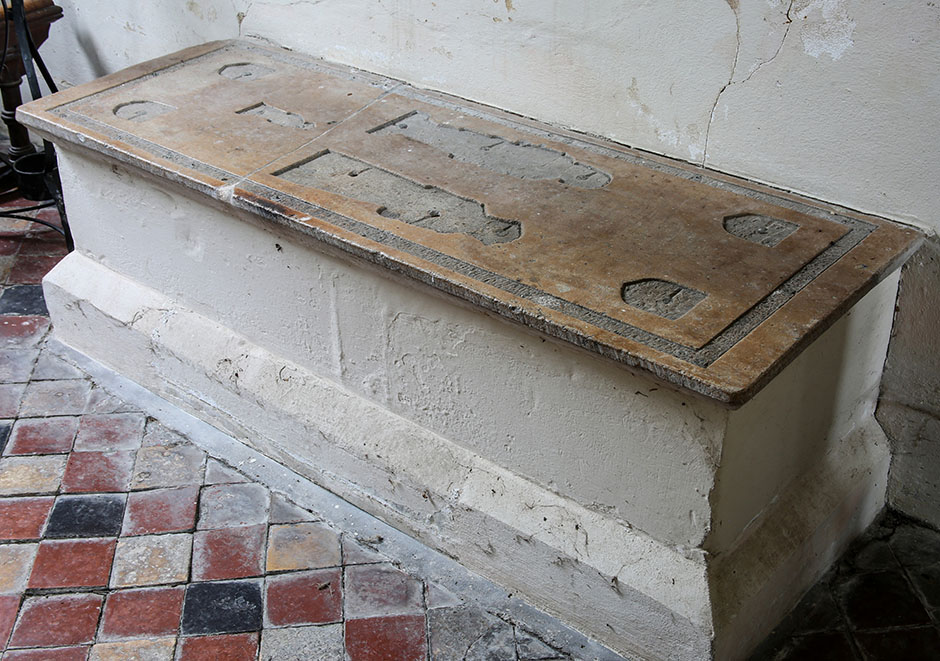 The Monument to Benedict Lee is a short table-top tomb with a large slab on top with indents for brasses that have disappeared long ago. There were figures of a man, a woman, and one child, with 4 shields, and a marginal inscription. Most had disappeared by the 18th Century when Browne Willis described some of the armorial bearings that survived then. 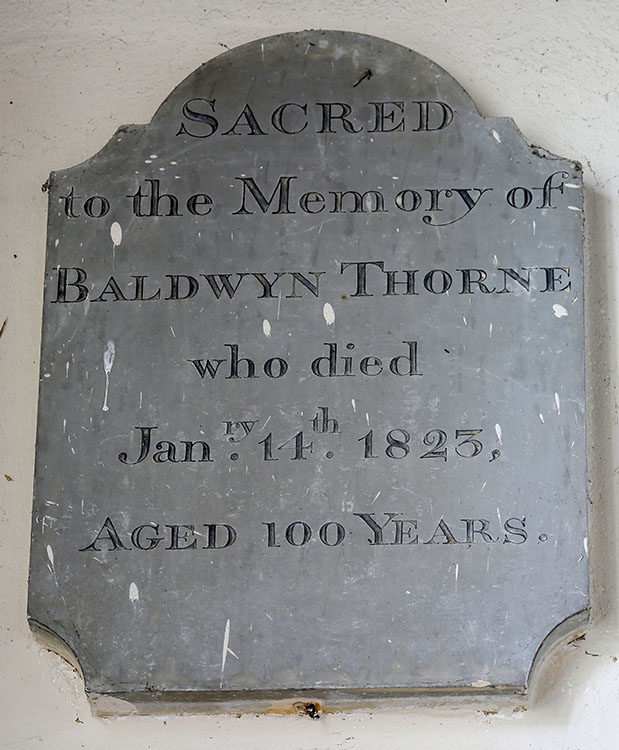 Monument to Baldwyn Thorne who died Jan 14th 1823, Aged 100 Years. That would certainly be a remarkable age for 1823, but not unknown, according to monuments one can see elsewhere.

Brass Plaque to Rev Edward Bonus. There is a very similar Plaque (although with rounded top) in Buckland. They both carry the Makers Name of 'T Pratt and Sons London'. 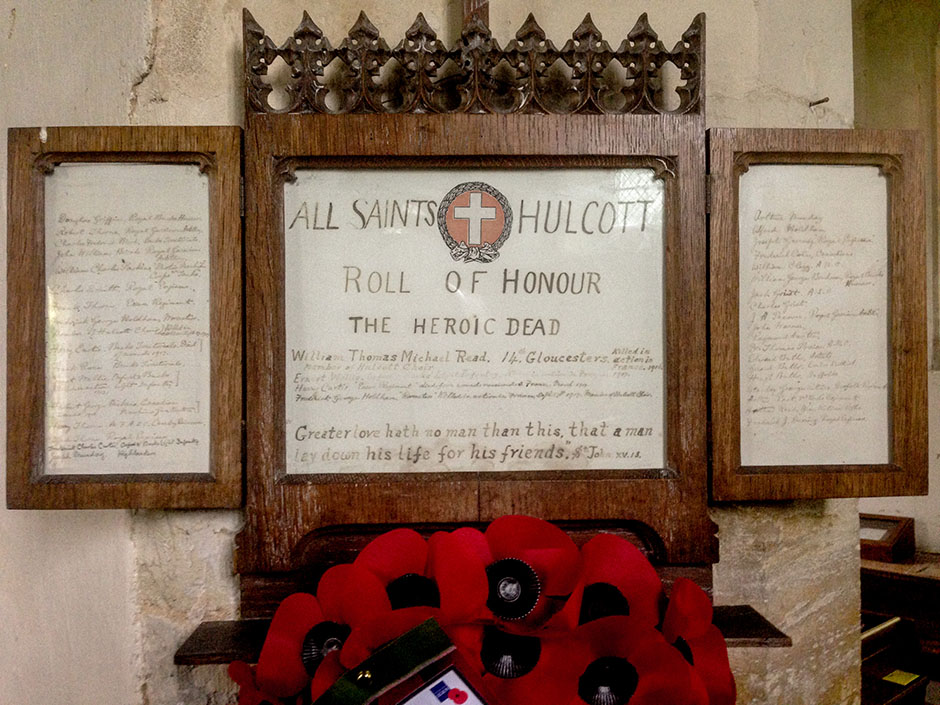 Fixed on the Arcade Pier, this 1st World War Memorial is a very poignant piece of work.